The Ties That Bind: A Helsinki Commission Staff Report on Secure Supply Chains 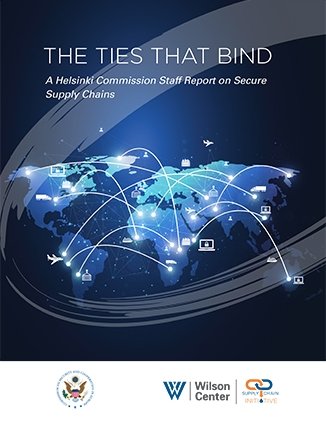 Tune in on Tuesday, June 15 for a conversation on this report and supply chain security with Senator Ben Cardin (D-MD), Chair of the Helsinki Commission.

The COVID-19 pandemic has laid bare long-standing vulnerabilities in U.S. and global supply chains, including American reliance on sole-source manufacturing and on Chinese manufacturing, in particular. This report examines threats to U.S. and global supply chains created by doing business with authoritarian regimes that flout the rule of law and recommends policies to strengthen global trade and commerce.

The Commission on Security and Cooperation in Europe, also known as the Helsinki Commission, is an independent U.S. Government commission created in 1976 to monitor and encourage compliance with the Helsinki Final Act and other OSCE commitments. As a part of the 1990 Charter of Paris, the Concluding Document of the Bonn Conference on Economic Cooperation in Europe, and related frameworks, OSCE participating States undertook commitments to uphold free and competitive market economies, improve corporate governance, and combat corruption. These commitments are threatened by the actions of authoritarian regimes in global supply chains.

This report identifies and examines seven threats to U.S. supply chains: (1) the theft of intellectual property, (2) defective and substandard products, (3) human rights abuses, (4) customs and border operations, (5) data privacy and security, (6) lack of transparency, and (7) free riders and illicit transactions. The report also briefly discusses foreign authoritarian investment in the United States. Finally, it analyzes whether certain goods should be considered for special status based on national security concerns. The report concludes that, rather than focusing on goods or industries, the United States should build a secure network of suppliers.

The report recommends a menu of policy options in a framework of three tiers based on (1) non-binding standards and voluntary guidelines, (2) international framework and development efforts, (3) domestic U.S. law and executive action. Recommendations aim to mitigate the threats identified by the report and ensure that supply chains become—and remain—transparent, responsible, accountable, and resilient.

The first tier focuses on the creation of a “certified secure” standard for individual companies and the establishment of a Secure Supply Chains Initiative, modeled on the Extractive Industries Transparency Initiative, which would set guidelines for participating countries.

The second tier reflects the need to apply existing international agreements to the problem; add anti-corruption provisions to new agreements; consider rule of law-based country groupings such as the D-10 concept; leverage development to create rule of law-based markets that offer an alternative to authoritarian ones; elevate the fight against authoritarian corruption; and redouble efforts at inter-parliamentary diplomacy.