Wheel of Fortune: The Battle for Oil and Power in Russia 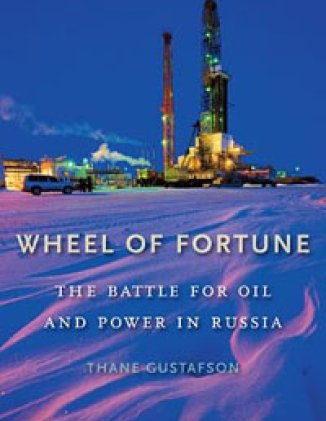 As Russia’s Soviet-era oil legacy gradually runs down, the Russian oil industry will face new challenges and higher costs. “This will result in a lower flow of revenue to the Russian government at a time when the Russian state budget has become more dependent on oil than ever before,” said Thane Gustafson, Senior Director, Russian and Caspian Energy, IHS Cambridge Energy Research Associates, and Professor, Department of Government, Georgetown University. Reflecting upon his book, Wheel of Fortune, at a 19 February 2013 presentation at the Kennan Institute, Gustafson explained how the mounting problems within the Russian oil industry could threaten the solvency of the Russian state.

Gustafson explained that the last twenty years have only been “chapter one” for the post-Soviet Russian oil industry. During this chapter, the structure of the Russian oil industry changed during 1991-95 from horizontal, with different Soviet ministries controlling each different stage of production and distribution) to vertical, with individual companies controlling all phases of the business. Oil production initially fell by half during this difficult transition. Production then recovered following the stabilization of the industry in 1996, the privatization of the industry in 1997-2002, and the boom in oil prices that began in 1999.

The Soviet-era oil legacy (over half of Russian oil production today still comes from fields that were already in production in 1991), combined with higher oil prices and the implementation of new techniques, generated increased rents through little cost or investment in legacy fields. But beginning in the 2000s, the Russian government captured a large share of these rents through higher taxes. The resulting boom in tax revenues boosted the Russian state budget and catalyzed the rebuilding of central state power.

But Chapter One—the Soviet legacy—is now coming to an end. Russian oil’s next chapter, in contrast, will feature rising costs and declining returns as industry and the government will have to start investing in new fields and capacities. This will result in a lower flow of profits to the oil companies and rents to the government at a time when the Russian state budget has become increasingly dependent on oil revenue.

The fight over declining profit share is not an even one, Gustafson pointed out. The privatization of the Russian oil industry gave its new owners great wealth, but did not guarantee the industry’s autonomy or freedom from government control. Private ownership of oil companies was nearly complete by the early 2000s, but the pipeline system, the oil in the ground,  and the regulatory structure remained under state control. According to Gustafson, this explains the relative ease with which the Russian government has been able to regain control of the oil industry and claim back ownership stakes. The central event in this story was the jailing of Mikhail Khodorkovsky, CEO of Russia’s largest oil company, Yukos, and the transfer of Yukos’ assets to the state firm, Rosneft.

The world oil industry is constantly evolving and the Russian oil industry must keep up. The “tight oil” revolution of next-generation technologies has opened up field opportunities that were once considered uneconomical, especially in the United States. Gustafson argued that the Russian oil industry could benefit from the “tight oil” revolution.  But the chief lesson of tight oil in the U.S. is that the conditions for success lie “above the ground,” in the legal, fiscal, and regulatory environment and in the structure of the industry.  The challenge of tight oil is whether the Russian oil industry, dominated by large companies and increasingly under the control of the state, can take advantages of the new opportunities, which require not only new technologies but also efficient company management and a supportive state.

Some Russians like to say that, “the iron curtain didn’t go down, it was raised up.” However, given the increasing difficulties of Russian oil extraction and production, and decreasing cooperation between the Russian government and the West, Gustafson concluded that there is another part to this phrase: “Yes, the iron curtain has gone up, but it is only half way up.” Western companies and international companies presently contribute about five percent to Russian oil production. The Russian state budget requires increased revenues from the oil industry at a time when the costs of oil extraction and production are increasing. Unfortunately, the Russian government’s hesitance to allow the industry to integrate fully into the world oil market and welcome international assistance and partnership works against the ability of the Russian oil industry to take advantage of opportunities that will increase revenue.