Dispatches is the monthly newsletter of the Wilson Center's Asia Program.

Welcome to Dispatches, the monthly newsletter of the Wilson Center's Asia Program. Subscribe today to make sure you never miss an issue.

The Taiwan Relations Act at Forty and U.S.-Taiwan Relations / The Asia Program joined CSIS and the Brookings Institution to host a full day public conference on April 9, 2019. The conference featured analysis of the creation and implementation of the TRA, and how it continues to guide U.S.-Taiwan relations and interaction among Taiwan, China, and the United States. The event featured keynote remarks from Represenative Gerald Connolly of Virginia and a VTC speech from President Tsai Ing-wen of Taiwan. View the full event video on YouTube.

Preparing for the Unpredictable: The ADB and Natural Disasters, Trade Disputes / On April 16, 2019 the Asia Program hosted Asian Development Bank Chief Economist Yasuyuki Sawada as he discussed the latest Asian Development Outlook report and the impact of natural disasters in the region. Video of the event is now available.

India's election: What you should know as the world's biggest democracy votes / CBS News

As Indian elections begin, Pakistan fears tensions could worsen with its nuclear rival / The Washington Post

Forgotten cause: The tragic reality facing the Rohingya / Arab News

Where Relations Stand Between The U.S., South Korea And North Korea All Things Considered (NPR)

The Latest On The Easter Attacks In Sri Lanka / 1A (WAMU)

New Survey Release: What Do Afghans Think About Current Peace and Reconciliation Efforts? / May 02 / Live Webcast

U.S.-Japan Relations in Disarray: Who Will Sustain Liberal International Order, and How? / May 07

What’s Next for the Rohingya? / Video & Event Recap Now Available

Ambitions Beyond Growth: Sustainable Development Goals in Asia and the UN

Thinking Through the Unthinkable in Sri Lanka / Michael Kugelman

Where Does It Stand and Where Should It Shift? A South Korean Perspective on North Korea Nuclear Diplomacy / Jungkun Seo

On May 6, 2019, the Wilson Center will be honoring former U.S. Ambassador to the United Nations Nikki Haley for Public Service and Chairman of Northrop Grumman Corporation Wes Bush for Global Corporate Citizenship at the Annual Woodrow Wilson Awards. Since 1998, the Wilson Center has honored those who through thoughtful discussion, generous philanthropy, and selfless service have made the world a better place for all of us. Tickets and additional information are available at the Wilson Center website. 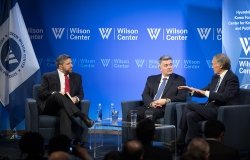