An Enduring Peace: 25 Years after the Camp David Accords

On September 5, 1978, three world leaders arrived at the Camp David presidential retreat in the Catoctin Mountains of northern Maryland to work toward forging peace in the Middle East. U.S. President Jimmy Carter, Israeli Prime Minister Menachem Begin, and Egyptian President Anwar Sadat and their delegations would spend 13 days there, isolated from the world, steeped in frustration over radically different Israeli and Egyptian perceptions, but refusing to give up hope. Both Egypt and Israel shared a desire for peace and security and sought to build on that common foundation.

After much negotiation and 23 revised drafts of the agreement, on September 17, 1978, Begin and Sadat signed the Camp David Accords in which Begin agreed to relinquish the entire Sinai Peninsula, captured by Israel in the 1967 Six-Day War, in exchange for peace and full diplomatic relations with Egypt.

On September 17, 2003— 25 years to the day when the accords were signed—members of the three delegations reunited at the Woodrow Wilson Center for an event organized by the Carter Center to commemorate this unprecedented moment in history. Panelists reflected on their experiences at Camp David and discussed both difficulties and opportunities in the Israeli-Palestinian conflict today. 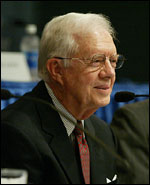 Fear and animosity ran deep between Israel and Egypt, but tensions thawed in November 1977, when Begin invited Sadat to visit Israel. Sadat accepted and addressed the Knesset (Israel’s Parliament), speaking of his desire for peace. A month later, Begin became the first Israeli leader to visit Egypt.

But the initial optimism faded rather quickly following Begin’s trip. Recalled President Jimmy Carter, “The initial impetus by Sadat to go to Israel and Begin to welcome him dissipated completely. It was only after that [when] I decided to send invitations directly to Begin and Sadat personally.”

Despite high expectations upon arrival at Camp David, irate shouting matches erupted early on between Begin and Sadat, creating an impasse and forcing the American delegation to sequester them from each other. “For the first three days,” recalled President Carter, “I attempted to have Begin and Sadat come together. The two men were totally incompatible…shouting, banging on the table, stalking out of the rooms. So for the next ten days, they never saw each other. We negotiated with them isolated from one another.”

For the remainder of these negotiations, Carter shuttled revised drafts of the agreement between the Israeli and Egyptian delegations. Carter had worked closely with Jody Powell, his press secretary, to prevent media proceedings from interfering with the negotiations. “The members of all three delegations did something rather rare,” reflected Powell, “which was not to try to advance their own personal interests through their journalists at the expense of the larger interest of peace.”

The primary negotiator from the Israeli delegation, former Attorney General Aharon Barak—currently chief justice of Israel’s Supreme Court—said, “We were prepared. We had peace plans and drafts…both parties negotiated in good faith.” He added, “I had many fights with [Osama] El-Baz, [chief negotiator for Egypt, then under-secretary for foreign affairs]. It was tough, but he was honest. A promise was a promise.”

Carter’s National Security Adviser Zbigniew Brzezinski recalled the divergent temperaments of the two delegations. “The Israeli prime minister was strategically focused and intransigent in negotiating style, while the others in the delegation were more flexible,” he said. In contrast, “The Egyptian delegation was headed by a president quite determined to succeed, who was a visionary and conciliatory, but his tough-minded entourage was more inclined to feel [Sadat] was making too many concessions.”

“Israel wanted a breakthrough,” recounted Israeli Attorney General Elyakim Rubinstein, then the assistant director of Israel’s Foreign Affairs Ministry. “For 30 years, we had wars with Egypt. The idea of breaking this cycle—with all of the problems and apprehensions—was high on our minds.”

One of the toughest issues for Israel was whether to dismantle the 14 Jewish settlements in the Sinai, which Begin finally was willing to sanction following approval in the Knesset. Another major hurdle was the status of the other disputed territories, in addition to the Sinai, that Israel had captured in the 1967 Six-Day War. The initial Camp David framework proposed to address potential Palestinian autonomy in the West Bank and Gaza, but the parties present would limit the scope to the status of the Sinai.

“We were negotiating an issue in which the principle party was absent,” said Osama El-Baz, via videoconference. “We didn’t have the power of attorney by the Palestinian people and wouldn’t have accepted any. They have to speak for themselves.”

Still, in the final hours before the agreement, Carter had tried to get Begin to agree on a freeze on West Bank and Gaza settlements that would last through the negotiating period. The one big mistake at Camp David, recalled William Quandt, then a staff member on the National Security Council, was that Carter thought he had a verbal agreement on a settlement freeze from Begin and relayed the breakthrough to Sadat who then signed the accords.

Carter recalled, “I misunderstood what Prime Minister Begin said. I have no reflection on his integrity or honesty.” Quandt said, “It turned out it was a problem that came back to haunt us. Today, there are 10 times or more that number of settlers in the West Bank.”

Throughout these negotiations, with all of the skepticism and setbacks, with periods of frustration and, at times, utter hopelessness, the three delegations persisted and prevailed.

Every panelist attributed the ultimate success of Camp David to the personal attention and perseverance of President Carter who was unrelenting in his quest for peace. Vice President Walter Mondale echoed this sentiment, commending “the intense involvement of an educated, deeply committed president.”

Samuel Lewis, then U.S. Ambassador to Israel, underscored the importance of determined leaders. “You’ve got to have committed, strong, politically powerful, courageous risk-takers leading the local players if you’re going to achieve anything in this part of the world, and Begin and Sadat—in their own ways—both were that.”

“The key to the success of Camp David,” said Barak, “was imagination. Whenever we hit the wall, we immediately turned around and tried another technique…new constructions and new ideas.”

Carter recalled the many disagreements over definitions and schedules but said he resolutely stuck to his strategy of negotiating with a single document for all involved parties. “This was a very long and torturous effort,” reflected Carter, “to get everybody to agree on exactly the same document.”

Six months after signing the Camp David Accords, after further negotiations mediated by the United States, Begin and Sadat signed a peace treaty that remains binding and unbroken to this day. President Carter said, “The [Egypt-Israel] peace treaty—not a word of which has been violated in the past 24 ½ years—still sends a beacon of proof throughout the Middle East and the world that [peace] is not impossible no matter how difficult the task might be.”

In 1978, both Begin and Sadat received the Nobel Peace Prize. In 2002, President Carter received the award, in part for his role at Camp David.

Camp David negotiators had hoped the treaty with Egypt would be a first step toward a greater peace in the Middle East, and that soon after, they would engage Israel’s other neighbors in peace talks. But, rather than seizing the momentum from Camp David, conference panelists pointed out, future leaders instead missed a key opportunity to resolve the dispute before Israeli-Palestinian relations got further complicated by the burgeoning number of Palestinian refugees and disputed Jewish settlements in the ensuing two decades.

Rubinstein said Israel’s current objective is fighting the suicide attacks and blamed the current impasse in negotiations on the lack of a partner. “The public mood will change if we don’t have this daily bloodshed,” he said. “If a [competent] Palestinian leadership emerges, I’m confident we can reach an agreement.”

Brzezinski challenged that both sides need a willing partner. He said Israel continues “its policies of occupation, humiliation, expropriation of land, and collateral deaths during assassinations. [The Israeli side argues that] Palestinians should pursue a civil war against their militant groups while otherwise policies remain unchanged. One can’t expect a partner to plunge into civil war when his own situation is not improving.”

The most recent peace plan, known as the “road map,” drafted collectively by the United States, United Nations, European Union, and Russia, outlines steps both sides should take toward a two-state solution, to be achieved by 2005. But Israelis and Palestinians have hit major bumps in the road map and talks now center on whether and how to revive it.

Conference panelists, given their experience brokering the peace deal with Egypt, offered their comments and suggestions.

Brzezinski supported following the road map and outlined four critical steps: clarifying for all parties the endpoint; accelerating the process; pressuring both sides to comply; and, reinforcing the peace, perhaps by having an international presence. “All of that means a serious commitment based on compassion for the human tragedy that is involved here, but a compassion that is generalized and not selective,” he said.

Quandt disagreed with reviving the road map. He instead suggested presenting a plan that the Israeli and Palestinian publics would vote on in a referendum and, if the leaders agree, the international community would pledge support for economic development, Palestinian restitution, etc., similar to the Marshall Plan in Europe following World War II.

Hermann Eilts, then U.S. ambassador to Egypt, disagreed with Quandt, saying that achieving peace will require authoritarian governments implementing a plan from the top down.

Meanwhile, Harold Saunders, then assistant secretary of State for Near East Affairs, suggested a moratorium on negotiations until both sides define their wants and aims.

Harold Saunders, then assistant secretary of State for Near East Affairs, suggested a moratorium on negotiations until both sides define their wants and aims.
Ambassador Lewis endorsed the idea of a U.S. trusteeship in the occupied territories, under UN auspices, to maintain control while the Palestinian Authority builds up its political and economic infrastructure.

Former UN Secretary-General Boutros Boutros-Ghali—then Egypt’s Minister of State for Foreign Affairs—spoke via videoconference, supporting the idea of an international mandate in the West Bank and Gaza as a first step in reviving the road map.

“The proof that Camp David was a success is that peace prevails today between Egypt and Israel in spite of the deterioration of the situation in the Middle East, in the occupied territories, in Iraq,” he said. “Camp David contributed to the peace treaty [later] concluded between Jordan and Israel and helped Egypt play a role of mediator between the Palestinians and Israelis.”

Brzezinski said, “Camp David shows that if the United States is to play a constructive role in the Middle East, we must have a balanced, fair approach and be perceived as such by the international community.”

President Carter concluded, “With strong leadership, determined mediation that is trusted, a balanced role between Israel and the Palestinians, and good faith, I believe we can still see peace in the Middle East in our lifetime. That is my prayer. That is my expectation.”

Participants from the U.S. delegation included: