Skip to main content
Support
Explore More
Close
Event
Nuclear Proliferation/Non-proliferation
Are We Heading for a Blow-Up on the Korean Peninsula?
On April 20, 2017 at 10:00 – 11:00
Share on FacebookShare on TwitterShare via Email
SharePrint
Part of the ‘A New Chapter’ on North Korea
Article

For an interview or briefing with any of the experts below, contact Ryan McKenna,
202/691-4217, or ryan.mckenna@wilsoncenter.org.

Robert S. Litwak is the author of Preventing North Korea’s Nuclear Breakout (published in March), Deterring Nuclear Terrorism, and Iran’s Nuclear Chess: After the Deal which have been frequently cited by The New York Times, The Washington Post, among other outlets. He is a consultant to the Los Alamos National Laboratory on non-proliferation.

James F. Person is the Director of the Hyundai Motor-Korea Foundation Center for Korean History and Public Policy. Person holds a Ph.D in modern Korean history and teaches courses on modern Korean history at the George Washington University. He has appeared on CBS, CSPAN, National Public Radio, Vice News, KBS, and his interviews have appeared in Newsweek, CNN, USA Today, the LA Times, the Donga Daily, and other news outlets.

Jean H. Lee is a Seoul-based Global Fellow with the Wilson Center. She led the Associated Press’ Korean Peninsula coverage from 2008 to 2013. In 2011, she became the first American journalist granted permission to join the local foreign press corps in North Korea, and opened the news agency’s Pyongyang bureau in 2012. 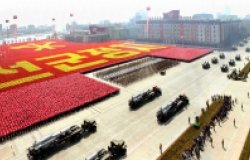 Foreign Affairs
U.S. Foreign Policy
Can America Trust the Taliban to Prevent Another 9/11?