BY EWAN LAWSON AND NATIA SESKURIA

A key factor in states’ ability to manage the COVID-19 pandemic has been the availability of effective medical facilities for both the treatment of patients and the testing of those who may have been exposed in order to help to control the spread. It is perhaps surprising, then, that throughout the crisis, hospitals and labs have faced regular attacks by malicious actors such as organized crime groups—and, in some cases, states.

International humanitarian law affords protected status to medical facilities, but in recent conflicts these facilities have been targeted deliberately. In the second half of 2016, more than 170 such attacks were reported in Syria, with confirmation from a variety of sources including the United Nations and a number of nongovernmental organizations. Both the Syrian and Russian governments disputed the veracity of these attacks and argued that there was no policy of deliberate targeting. However, the overwhelming evidence both from witnesses and imagery was that hospitals and clinics had been struck by both airstrikes and artillery fire, none of which appeared to be accidental.

Though these attacks took place during armed conflict, the COVID-19 crisis has seen other forms of efforts to disrupt the operations of medical services. Agencies such as the ICRC (International Committee of the Red Cross) have identified hospitals and related facilities as being vulnerable to cyberattacks because of their increased dependency on digital resources and a related growth in the potential targeting opportunities. Most of these attacks are criminal in nature, but some instances, such as the WannaCry incident which disrupted elements of the UK National Health Service in 2017, have been linked to states, in that case North Korea. The ICRC has noted that during the current crisis, medical facilities from Thailand to the Czech Republic and the United States, many of which have key roles in testing for the new coronavirus, have been subject to disruptive cyberattacks. Although it is difficult to understand the specific purpose behind these attacks, given the global nature of the pandemic, it is reasonable to suggest that malicious actors may be seeking to undermine public confidence in their governments at a time of increased social tension.

In the past, state-run information operations and propaganda were designed to emphasize the delivering of the state’s strengths or the weaknesses of the target. Today, they are being used increasingly to create doubt, confusion, and disruption in target populations. Sometimes, this information campaign is linked to an activity such as a cyberattack. The cyberattack that affected Ukraine’s power grid in 2015 and 2016, for instance, appeared to be designed to undermine confidence in the Ukrainian authorities. However, in at least one case during the current crisis, such a campaign apparently was intended to weaken the credibility of a key facility used for COVID-19 testing: the Lugar laboratory in Tbilisi, Georgia.

Since 2018, the US-funded Richard Lugar Center for Public Health Research, based in Tbilisi, has been targeted by the Kremlin propaganda machine. The pandemic has shown that despite Russia’s internal problems and unsuccessful attempts to prevent the spread of the new coronavirus, the Kremlin’s malign activities have no constraints when it comes to spreading disinformation.

As of today, Georgia is a regional leader; globally, it has been one of the most successful countries in managing the pandemic and keeping a low death rate. The timely, targeted, and effective measures introduced by the government, headed by Prime Minister Giorgi Gakharia, allowed Georgia to reopen its economy earlier than initially anticipated. The Lugar Center has played a key role in Georgia’s success. Since the first case of coronavirus was detected in Georgia in February 2020, the lab has been on the front lines of fighting COVID-19. Equipped with unique technology in the region, the center is able to provide speedy diagnoses and deliver testing results in less than 24 hours. This allowed the Georgian government to gain some time to prepare its hospitals and healthcare system for the expected influx of patients.

The value and strategic importance of the lab became clear even for sceptics in Georgia, who in the past had been inclined to believe anti-Western propaganda targeting the facility. According to the Kremlin, the United States has been using the Lugar Center to carry out illegal experiments on humans, develop biological weapons, and spread viruses. Most recently, in April 2020, the spokesperson of the Russian Ministry of Foreign Affairs (MFA), Maria Zakharova, initiated another attack on the Lugar Center, claiming that the US-funded laboratories in proximity to Russia may be developing dangerous pathogenic agents, including for military purposes. On May 26, the Information and Press Department of the Russian MFA published a statement that reiterated Zakharova’s earlier claims and stated that Moscow seeks to organize a visit by the Russian experts to the Lugar Center, requesting to have access to all laboratory premises, including those occupied by the US specialists.

Such attacks have come as no surprise, and most likely will intensify in light of Georgia’s clear success in its fight against COVID-19. Russia finds it hard to deal with the fact that Georgia’s strategic partnership with the United States is built on practical mechanisms of cooperation that enable Georgia to become more resilient in the face of both hybrid threats and global pandemics. At this time, the Lugar Center’s life-saving role is just one example of US-Georgian cooperation.

Yet, when it comes to Russian disinformation, the timing is important. The Kremlin is attempting to undermine Georgia’s unexpected success, which it finds embarrassing in light of its own domestic failures to control the virus, and at the same time discredit the US role in the post-Soviet territories. As it seeks to undermine stability in Georgia, it also is targeting its internal audience to suggest to ordinary Russians that the “evil West” has orchestrated the global health crisis and is manipulating the governments in its “near abroad.”

This campaign, however, extends beyond Georgia. The Russian media has also targeted the Central Reference Laboratory in Kazakhstan, which was established as part of the WMD (Weapons of Mass Destruction) Infrastructure Elimination Agreement between Kazakhstan and the United States following the end of the Cold War. Since the outbreak of the pandemic, the laboratory has played an important role in detecting the virus in a timely manner and subsequently has become a target of Russian trolls and media. Given the intensity of false allegations and attacks on the US-funded facility, Kazakhstan’s Ministry of Foreign Affairs made an official statement denying that the laboratory had any involvement in developing biological weapons that Russian propaganda alleges are similar to the new coronavirus.

From destructive bombing through disruptive cyberattacks and disinformation, the time has come for the international community to call a halt to attacks on medical facilities. This needs to start with the enforcement of international humanitarian law, but also should be developed further into new norms that apply outside of armed conflict. It is in no one’s long-term interest to undermine the very organizations and institutions that can keep populations safe in the face of a challenge that has no respect for ideology or borders. 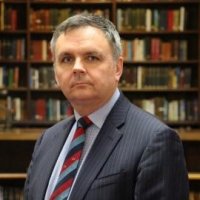 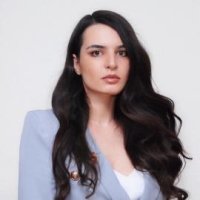 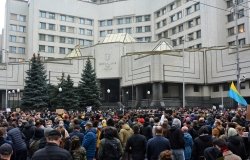 Blog post
Disinformation
A Tug-of-War in Ukraine’s Information Space: Media Bans versus Freedom of Speech
By Nina Jankowicz on February 18, 2021 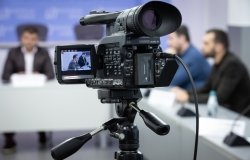