Investing in Refugee Women is not Just Right and Decent, But Smart 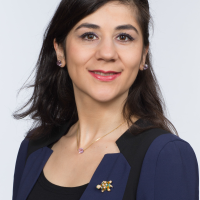 Imagine you are a female professional in your country; a lawyer, teacher, engineer or a photographer. Out of personal, religious or socio-economic reasons, you have to move to an unknown country because you want to resettle in the safe and liberal world whose ideas you embrace. Imagine another situation in which you are a housewife, with a primary school education, who got married quite young and established a family with several children but low income. Until the outbreak of the civil war, you had been living in a rural area of Syria with your family. Your next destination becomes a province in Turkey’s southeast- until the unrest in your country calms down.

These stories might sound quite different at the first glance. Yet, they are part of the stories of refugee women in Turkey. Coming from different countries, cultural norms, educational backgrounds and socio-economic status, these women attend the same vocational education courses organized by the International Labor Organization (ILO). For some, it is hard enough not to work and be able to practice their profession. For others, having to work outside of home is a challenge itself. For example, a UN Women Study of 2018 illustrated that 92 % of Syrian women had not worked in their country before coming to Turkey. In the course of Syrian mass migration into Turkey since 2011, the number of Syrian women in the labor force increased only by 8 %, meaning only 16 % of Syrian female refugees are employed in Turkey. Similarly, according to an ILO Household Survey, 93 % of non-Syrian women from Iraq, Afghanistan and Iran have not yet joined the workforce in Turkey - formally or informally.

At the ILO Office in Turkey, we believe that everybody aged between15-64 has the right to work under decent conditions; decent jobs for women lead to economic empowerment and economic empowerment of women paves the way for a better life for all. Since 2015, we have been implementing the “Refugee Support Program” in Turkey with a particular focus on refugee women. For example, in cooperation with UN Women, we are running a women-only center (SADA) in Gaziantep, one of the Turkish provinces with the highest density of Syrian refugees. SADA brings women from refugee and host communities together in a safe and peaceful learning environment. At this Center, women can receive psycho-social support, attend Turkish language classes, bring their children to the Center for professional child care, produce food items for sale and thus improve their livelihoods. In addition to this Center, in more than a dozen of Turkish provinces, we have been organizing trainings for refugee women to gain skills competency in fields ranging from foreign trade, sewing, hair dressing and cooking to foreign trade, computer operations and ardunio circuits.

Although the number of refugee women in the Turkish labor market did not increase tremendously after these trainings – mostly due to socio-cultural reasons or bureaucratic procedures for formal employment, we deem these trainings a success for a number of reasons. First, for those who have been active in the labor market prior to their migration, these courses are like fresh air, offering them an opportunity to socialize, taking them out of depression and healing their trauma. Second, for those who have not previously been in the workforce, these trainings act like self-confidence boosters. They are tools which could eventually turn them into breadwinners in their families.

During my regular visits to our training centers, hearing women say “I don’t feel like a refugee anymore”, “these courses give me the feel of purpose I had lost” and “I have realized my capacity to learn” is priceless. Once a refugee woman is encouraged to go out of the house for these courses, this is the point where adaptation starts- for themselves and family members. Having been socialized, learned new skills and gained self-confidence, these women are able to engage in educational affairs of their children, run errands in public offices and eventually integrate into the labor markets.

Turning refugees into employees illustrates one of the best examples of a win-win situation in the phenomenon of contemporary migration. On the one hand, refugees become self-resilient with improved livelihoods. Their self-confidence boosts thanks to the ability to earn their own bread and their adaptation in Turkish society accelerates through employment. On the other hand, they fill vacant jobs in various sectors and contribute to the Turkish economy, thereby lifting the socio-economic burden on the state. Including refugee women into labor markets adds even more value to this win-win situation. With increased skills and a change of mentality regarding production, women become engines of their families’ adaptation, well-being and livelihood. Therefore, investing in skills competency of refugee women is not only the right and decent, but also the smart thing to do.

The views expressed here are of the author and do not represent the opinions of the International Labour Organization (ILO).