Explore More
Close
Blog post
Gender Equality
A Woman Artist is the Real Revolution
By Souad Douibi on September 16, 2022
Share on FacebookShare on TwitterShare via Email
SharePrint
Part of the Art in MENA: A Medium for Activism
Blog post 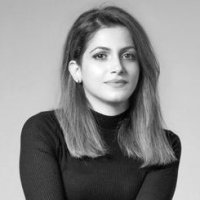 ...from ancient to contemporary times, women have played a major role in any society’s growth, which is generally subject to a myopic view.

My work tries to bring history back to life with bright colored, traditional Bahraini dresses influenced by Japanese manga in the facial features. Through small details, I highlight the culture and heritage of the Middle East and North Africa region, with a focus on women in the pearling era.

For more than 2000 years, Bahrain’s pearls have been prized as some of the best natural pearls in the world. Mostly ignored or forgotten, women had a very important role in society and the city or village. They were left behind for months to lead and keep everything in order when the men went sea diving for pearls for months. Historical books and writings focus mainly on men’s achievements during that time. But, from ancient to contemporary times, women have played a major role in any society’s growth, which is generally subject to a myopic view. My work focuses on highlighting this essential aspect to all societies.

I do not feel that women in the Arab states of the Gulf are well represented in the art scene. I am considered liberal by my region’s standards, as the majority of females cover their hair and body with Hijab and Abaya. I try to give liberty and freedom to women in my artwork, which some find unacceptable, as they believe that painting and drawing human figures is religiously forbidden. But I am very optimistic and happy with the achievement of women in the region, recently with women’s rights in Saudi Arabia, which reflects on the whole region and has given women more freedom and power.

My educational background is in business management, and I worked in the corporate world for more than twelve years. I have been painting and drawing since childhood, and continued to practice my hobby until I turned it into a profession in 2014. I didn’t have the chance to study art, so I had to learn by myself from books and online. Though, I wanted to attend a class on art history to enhance my background, so I went on to Accademia Riaci in Florence and London Art College. From there, I had to come up with my own process.

My shift from a male-dominated sector to the arts has made me a happy person, with many ambitions and dreams. But like any other field, I discovered art is also dominated by males, and I’ve faced difficulties in expanding and getting my art out there. But with the potential of social media, I was able to overcome these hurdles.