A Story from Yemen: A Young Girl's Fight Against Child Marriage 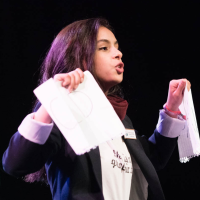 Since the war started in Yemen, the rate of child marriage for financial and social purposes has doubled.

Yemen is a great country with a population that exceeds 30 million. However, the illiteracy rate is greater than 80 percent, while the majority of the population is deprived of education and suffers from civil wars, violence against women, revenge killings, and physical assassinations for social, religious and political motives. Since the war started in Yemen, the rate of child marriage for financial and social purposes has doubled. Freedoms for girls are further repressed, and most schools have closed. Despite all this, voices from outside Yemen are calling for an end to the war, raising awareness about the importance of human rights, and using social media to bring attention to the rights of women and girls. Sadly, these voices quickly surrender to an aggressive reaction from society, as people believe the calls of these activists “violate the teachings of God” and “increase corruption on Earth.”

My activism began in 2013 when I almost became a victim of underage marriage. I ran away from my home and recorded a video that appealed to the world. The video was translated into more than 40 languages and was used twice in a Yemeni political conference for the criminalization of underage marriage. At the time, even though I was only 9 years old, I was imprisoned for 10 days. People who believed that legislation to criminalize child marriage violated the teachings of Islam did not want me to appear in the media. Two years later, towards the end of 2015, I was kidnapped and held by Al Qaeda in southern Yemen for 14 days and almost lost my life.

We are waging a fierce and relentless battle to raise awareness among the Yemeni people, and we will never surrender. Whatever the challenges that lie ahead, we will work to spread our message about the importance of women's rights in society and their important role in rebuilding the homeland. We will make the voice of peace and coexistence louder and stronger than the sound of war, bullets, and blood.

When I arrived in Great Britain, took off the veil, and showed my hair, I did not expect to create a wave of anger among the people or face a wave of criticism greater than when I began my human rights activism. I decided not to surrender, but to continue to educate society and project my voice to them. I discussed human rights issues to change their beliefs towards peace, coexistence and love over their leanings towards a culture of hatred and violence. Armed for battle, I did not expect many of them to respond quickly and warmly with love. My words have created widespread interest and intimate friendships. Dozens of YouTubers have also carried on the discussion about the ideas that I conveyed to them. This is exactly what I hoped, because engaging in dialogue and listening to new ideas is the first step to changing beliefs.

I will continue to raise my voice for this cause until my people stand proud of the women in their midst as partners and until they believe in every woman’s capabilities and equality in both rights and duties, without discrimination whether it be racial, sexual, religious, social, regional or in any way.