The Way Forward for Women in Libya 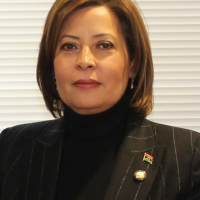 I am proud to be the first woman to represent Libya as its Ambassador to the U.S.  Women now serve in all facets of public life in Libya, but we still face some obstacles.  Few women have been appointed to high-level positions as ministers or judges and there have been too few female ambassadors appointed to represent Libya in other countries.  Despite an increase in the labor force participation rate over the last few years, women still represent only 25% of the Libyan workforce in both the private and public sector.   There are numerous reasons for this lack of representation, including social and cultural norms.  The result is that many talented and educated young women in Libya embark on promising professional careers, which, are then cut short.  Thus, we must be vigilant in our effort to support younger generations of women who want to help rebuild our country.

Moreover and despite the fact that participating in government on a decision-making level is still hard for women in my country, we are making huge strides. A significant turning point occurred at the time of the revolution that rid our country of dictatorship. It is widely understood that Libyan women were instrumental in supporting the effort for freedom during the tumultuous revolution in Libya in 2011. Since then, the number of women entering parliament through elections has increased.

During the Gaddafi regime, only two percent of total MPs were female, while the average percentage of women MPs of the two elected parliaments in 2012 and 2014 has been around 19 percent.  Each of the municipal councils, which were elected directly by the people for the first time ever in 2014, were mandated to elect at least one woman as one of their average five council members and they did.  Women have made great strides in the education sector: now the majority of college graduates in the country are women, with 77 percent pursuing higher education courses, compared to 63 percent of men.  Women are also now exceeding men in educational achievement, with girls outperforming boys academically. This positive trend is not yet fully reflected in women climbing to the top of the career ladder.

Thus, we must be vigilant in our effort to support younger generations of women who want to help rebuild our country. A quota system worked during our elections and got us 19 percent women participation in the House of Representatives. We must keep using this quota system constantly in executive and legislative nominations until society is ready to accept that women play a catalytic role towards achievement of transformational economic, environmental and social changes required for sustainable development. We believe that will take more time and will require breaking stereotypes in our country.  Nevertheless, we are proud of the strides Libyan women have already made in Libya and look forward to our country further embracing equality for women in the workplace and enhancing legal protections for women rights in the constitution.