Women Citizen-Artists and the Defense of Women’s Rights

Throughout the Maghreb, we are seeing forms of artistic expression, communicated using technology available to almost everyone, to promote women’s rights.

Throughout the Maghreb, we are seeing forms of artistic expression, communicated using technology available to almost everyone, to promote women’s rights. In the early 2000s, the Algerian song “20 ans Barakat- Wachdak Ya El Kadi” (“20 years, that’s enough, oh judge”), brought together a number of artists questioning the judge about the Family Code, and went viral online. During the 2010s, Hisham Fageeh of Saudi Arabia sang “No woman, no drive”, reggae-style recalling Bob Marley’s global hit “No Woman No Cry”, encouraging a change in the prevailing male view of women’s behavior.

Here, I will bring forward some activities where women artists have used the power of art and the World Wide Web to denounce male domination and state power. This will provide insight into how, in the context of globalization, many people are struggling to promote just causes and a peaceful world.

Lina Ben Mhenni (1983-2020), a photographer and cyber-activist, became known for her blog A Tunisian Girl, which featured photographs and interviews that gave a voice to those who denounced the repressive regimes both before and after 2011, voices the regimes refused to hear. In spite of a debilitating medical condition, numerous arrests, the destruction of her possessions, Lina’s work continued to champion freedom. Very quickly, her blog became an important source used by local and foreign journalists. It symbolized the struggle of youth during the “Arab spring”, so much so that it was published, translated into a number of languages, and contributed to her nomination for the Nobel Peace Prize in 2011. Upon her death, Lina was honored through a national funeral, a postage stamp commemorating her struggle, and the establishment of a fund that supports cultural projects for youth.

Khadija Tnana, visual artist, law professor, and former elected official, is among many women artists in Morocco who are fighting to defend women’s rights such as cartoonist Riham El Hour and video artist Kenza Benjelloun. To this day, Tnana’s contributions stand as a testament of her struggle against societal taboos and her fight for women’s rights and freedoms. Earlier this year, one of her works organized a flash mob into performing a viral group hymn and dance, originally from Chili, known as “The rapist, it’s you”.

The performance, also reproduced in Tunisia and Lebanon, shows the young women blindfolded, as a symbol of justice, questioning the authorities regarding the lack of equal treatment for women, youth, rural people, and the mentally-handicapped. Tnana explained to the media, “When we chant, ‘The rapist, it’s you,’ we are thinking of all forms of rape... I’m thinking right now of the raping of the rights of the youth who are now lost.”

This action takes on meaning in societies where individual rights are violated, as in the example of the independent Moroccan journalist Hajar Raissouini, who was arrested for illegal abortion and sexual relations outside marriage.  Sentenced to a year in prison, she owed her liberation to a royal pardon after she had spent 45 days in a Moroccan prison.

Cultural actions on this scale, together with other forms of struggle, are allowing women to achieve new rights.  As one example, for the first time in the history of Tunisia a woman, Thouraya Jeribi, was named Minister of Justice, in February 2020. 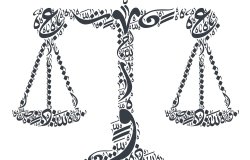 Blog post
The Power of Law to Influence Cultural Mindsets on Women's Rights
By Julia Taleb on March 8, 2020