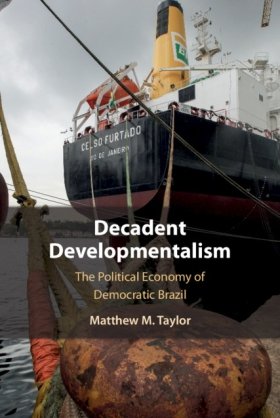 Brazil features regularly in global comparisons of large developing economies. Yet since the 1980s, the country has been caught in a low-level equilibrium, marked by lackluster growth and destructive inequality. One cause is the country's enduring commitment to a set of ideas and institutions labelled developmentalism. This book argues that developmentalism has endured, despite hyperactive reform, because institutional complementarities across economic and political spheres sustain and drive key actors and strategies that are individually advantageous, but collectively suboptimal. Although there has been incremental evolution in some institutions, complementarities across institutions sustain a pattern of 'decadent developmentalism' that swamps systemic change. Breaking new ground, Taylor shows how macroeconomic and microeconomic institutions are tightly interwoven with patterns of executive-legislative relations, bureaucratic autonomy, and oversight. His analysis of institutional complementarities across these five dimensions is relevant not only to Brazil but also to the broader study of comparative political economy.

1. Introduction
Part I. Complementarities in the Economic Sphere:
2. The macroeconomic foundations of the developmental state
3. Continuity through change: ideas as ballast for the developmental state
4. The developmental hierarchical market economy
Part II. Economic, Legal and Political Control of the Developmental State:
5. Coalitional presidentialism and defensive parochialism
6. Rents, control and reciprocity
7. The autonomous bureaucracy and incremental change
8. Conclusion
References
Endnotes.

"Few understand the interaction of politics and the economy in Brazil better than Matthew Taylor, whose superb study shows how political and economic complementarities constrain Brazil’s growth. Essential reading for all seeking to understand the Brazilian condition, the book will be of special value for those, be they ‘developmentalists’ or ‘neo-liberals', who seek to restore growth with equity in Brazil." David M. Trubek, University of Wisconsin-Madison

"Decadent Developmentalism is the successor to Peter B. Evans’ 1979 academic blockbuster on Brazil, Dependent Development. The early chapters on the continuing large economic role of the state, despite Brazil’s moderate neoliberal turn in the 1990s, are comprehensive and competent, while the later chapters on the pernicious failures of political and legal controls on state actions under ‘coalitional presidentialism’ are brilliant." Leslie Elliott Armijo, Simon Fraser University, Vancouver

"Despite its frequent economic crises, some argue that Brazil is a stable democracy with existing checks and balances that help avert severe institutional disruption and may eventually support long term economic growth. Matthew Taylor provides a distinct and perhaps more realistic picture of the country as a state subject to a nexus of complementary forces that shape and distort development policies. Although focusing on Brazil, the framework proposed and discussed in the book should be a reference for those interested in how country-level institutions promote or constrain development." Sérgio Lazzarini, Insper