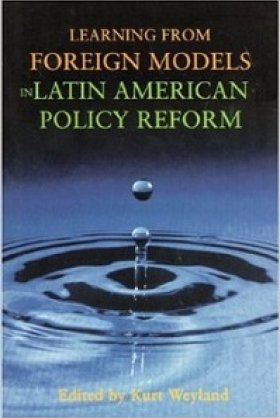 The international diffusion of policy ideas and practices is a subject of growing interest, raising such questions as: Why are there increasingly such waves of policy innovation? What prompts one country to emulate another's changes? Is it the influence of powerful international actors like the World Bank? Is it the motivations and interests of domestic actors? And how freely do imitators adapt foreign models to the needs and characteristics of their own countries, rather than simply replicating them?

Essays by leading academic experts and by policy practitioners with academic background address these important questions in Learning from Foreign Models in Latin American Policy Reform. Two chapters examine the influence of the international financial institutions. Then experts from Argentina, Brazil, Chile, Colombia, and Mexico discuss how foreign models influenced their own decision making in crucial areas of social policy such as pensions, unemployment insurance, and health care.

These case studies yield an unprecedented insider perspective on policy diffusion, in particular showing that the financial institutions have less clout than sometimes appears. They also show the crucial role played by policy specialists inside the public bureaucracy.

Kurt Weyland is associate professor of government at the University of Texas at Austin.

8. The Influence of Foreign Models in Health Reform in Colombia
Juan Pablo Uribe

9. The Role of Foreign Models in Mexican Healthcare Reforms in the 1990s
Carlos Cruz and Elena Carrera

“This volume is an important contribution, both theoretically and empirically, to the study of policymaking.”—Philip Oxhorn, Department of Political Science, McGill University

“The book is tightly integrated and uniformly well written.”—Michael A. Morris, Perspectives on Political Science

“A refreshing look at the origins and political complexities of implementing new policy regimes in issue areas traditionally dominated by populist inclinations.”—Shelley A. McConnell, Latin American Politics and Society