The Middle Kingdom at Center Stage: China's Past and Future Growth Strategy 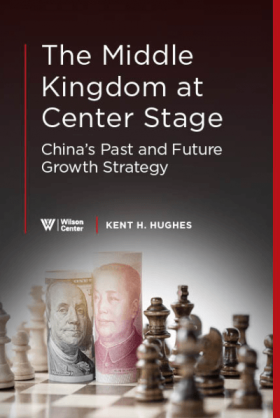 The Middle Kingdom at Center Stage: China's Past and Future Growth Strategy

Over the past 40 years, no issue has been covered by the global press more avidly than China’s economy. Only Middle East tensions and the march of technology have garnered as much attention. “The Chinese Economy” lies at the center of a galaxy of phrases and arguments familiar even to casual consumers of media: Over 800 million lifted out of poverty, reform and openness, special economic zones, world’s second-largest economy, corruption, pollution, intellectual property theft, nontariff barriers, stealing our jobs. The topic inspires exaggeration by triumphalists and catastrophists alike.

The Kissinger Institute on China and the United States presents Kent Hughes’ work to the public, online and in print, in hopes of fostering a more informed, less alarmist discussion of China’s rise. His volume is an excellent introduction or review for students, policymakers, journalists, and businesspeople who sense the weight of China’s economy in their work and communities, but cannot follow every twist in China’s quest for “modernization.”

Hughes’ analysis reflects five decades of experience as an economist on Capitol Hill and in think tanks. His approach is empathetic and dispassionate. He aims at understanding, not at placing blame.