U.S. Strategy in the Asian Century: Empowering Allies and Partners 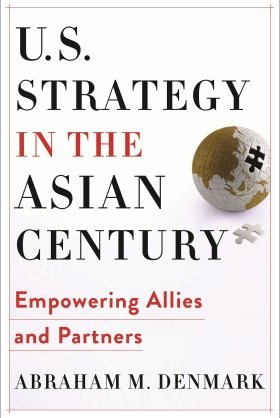 As the Indo-Pacific emerges as the world’s most strategically consequential region and competition with China intensifies, the United States must adapt its approach if it seeks to preserve its power and sustain regional stability and prosperity. Yet as China grows more powerful and aggressive and the United States appears increasingly unreliable, the Indo-Pacific has become riven with uncertainty. These dynamics threaten to undermine the region’s unprecedented peace and prosperity.

U.S. Strategy in the Asian Century offers vital perspective on the future of power dynamics in the Indo-Pacific, focusing on the critical roles that American allies and partners can play. Abraham M. Denmark argues that these alliances and partnerships represent indispensable strategic assets for the United States. They will be necessary in any effort by Washington to compete with China, promote prosperity, and preserve a liberal order in the Indo-Pacific. Blending academic rigor and practical policy experience, Denmark analyzes the future of major-power competition in the region, with an eye toward American security interests. He details a pragmatic approach for the United States to harness the power of its allies and partners to ensure long-term regional stability and successfully navigate the complexities of the new era.

“With insight and urgency, Denmark describes how the United States can successfully adapt to rapid technological change and dramatic geopolitical evolution in the IndoPacific. Strategy in the Asian Century is a must-read for anyone interested in how the U.S. can sustain its leadership in the world's most important region.” - Dr. Ash Carter, Former Secretary of Defense

“A timely reminder of how critical alliances and partnerships are to the United States, a fact only reinforced by the COVID-19 pandemic. Denmark draws on nearly two decades of experience working on the Indo-Pacific region inside and outside of government, delivering a country-by-country exploration of the Indo-Pacific's geopolitical importance to the United States and an actionable blueprint for our future strategy.” - Congresswoman Jane Harman, Director, President, and CEO of the Woodrow Wilson International Center for Scholars

“Abraham Denmark has written the playbook for the postcoronavirus world. Cooperation with allies and friends will become essential to balance a China which is determined to come out of the virus in a stronger strategic position. This is where we start.” - Ambassador Richard L. Armitage, Former Deputy Secretary of State

“… a compelling strategy for protecting vital U.S. economic and security interests in the region: Use all of the instruments of our power — diplomatic, economic, military, and our “soft" power — to engage and empower our regional allies and partners to shore up the foundations of the regional order. This insightful book is a must-read for scholars and practitioners alike.” - Michèle Flournoy, Former Under Secretary of Defense for Policy

“Denmark has delivered a timely and impactful study of how the United States can further its purposes in Asia through deeper engagements with allies and partners. Deeply researched and clearly argued, this well conceived book arrives at a critical juncture when American strategy in the region is under fundamental review.” - Dr. Kurt M. Campbell, Former Assistant Secretary of State for East Asia and the Pacific

“This excellent book shows with terrifying plausibility how quickly American power can become hollow leadership unless we return to reliable and creative emboldenment of our allies. Competing successfully with China will require it.” - Dr. Kori Schake, Director of Foreign and Defense Policy at the American Enterprise Institute

“Strategy in the Asian Century compellingly grasps the fundamental nature of US-China competition, the implications of profound geopolitical and technological change, and the critical role allies and partners must play to help shape the region's destiny. Denmark's deep experience and thoughtful analysis show us the way.” - Eric Rosenbach, Co-Director of the Belfer Center for Science and International Affairs, Harvard Kennedy School

“At a time when the speed of change in the Asia-Pacific seems to only be accelerating, Denmark’s calls for an evolved set of American alliances and partnerships resonate deeply with all who seek a stronger liberal order in the region and beyond.” - Dr. Yoichi Funabashi, Co-founder and Chairman of the Asia Pacific Initiative, Japan

“Denmark’s meticulous research provides a pragmatic rationale and lucid strategy to recalibrate American engagements in the region with old and new partners. A must read for all who are keen to uncover and debate pathways to sustain and advance the international liberal order in the backdrop of a pandemic that potentially upends many ‘givens’ around the existing world order.” - Dr. Samir Saran, President of the Observer Research Foundation, India

“Wealth and power are moving eastward, toward Asia. One of Washington’s advantages at this historic moment is its powerful and cost-effective network of regional allies and partners. Abraham Denmark’s timely book contains useful recommendations for both the United States and its friends as they navigate the Asian century.” - Dr. Michael Fullilove, Executive Director of the Lowy Institute, Australia

“Few have examined in detail what kind of policies the United States should adopt toward its treaty allies in Asia and how to do so. U.S. Strategy in the Asian Century does so expertly, filling a big gap in the current policy debate.” - Dr. M. Taylor Fravel, Security Studies Program Director, Massachusetts Institute of Technology

Vice President of Programs and Director of Studies; Senior Advisor to the Asia Program; Senior Fellow in the Kissinger Institute on China and the United States
Read More