Hala Al Ansari of Bahrain, Salma al Nims of the Jordan, and Dr. Mehrinaz el-Awady at ESCWA reflected on progress in women's leadership 25 years after the Fourth World Conference on Women and adoption of the Beijing Declaration and Platform for Action.

On October 13th, the Wilson Center’s Middle East Program hosted a panel discussion on women’s leadership in the Middle East and North Africa region, 25 years after the Fourth World Conference on Women and adoption of the Beijing Declaration and Platform for Action. The following are excerpts from the discussion that ensued featuring Hala Al Ansari, Secretary General of the Supreme Council for Women of Bahrain, Salma al Nims, Secretary General of the Jordanian National Commission for Women and Dr. Mehrinaz el-Awady, the Director of the Gender Justice, Population and Inclusive Development at ESCWA.

Hala al-Ansari, Secretary-General of the Supreme Council for Women of Bahrain gave credit to “to the Beijing Declaration because it focuses on the role of national machineries. The Supreme Council of Women was able to establish something that works for Bahrain. It is very important for us to have a national strategy that tackles the issues and concerns of the Bahraini society. Things got better over the last 20 years, but it was not by chance. Today we have a national model: an order to govern women’s needs in each and every field in the country.”

Dr. Salma Nims, Secretary-General of the Jordanian National Council for Women noted that women’s political participation has long been a priority in Jordan. In 2000, Jordan established a quota for female representation at different levels of elected bodies. Yet, pushback against “sustained commitment” results erratic progress for women’s political decision-making. Women face, “a problem in the entry, sustaining, and advancement of women in the public sector,” which Dr. Nims stated, “is the factory of leadership.” Two factors that contribute to this challenge is the burden women face of managing household responsibilities alongside their professional obligations and a new form of political violence that has emerged through social media.

Panelists also noted that the COVID-19 pandemic presents new challenges to women’s political participation and leadership advancement. The United Nations Economic and Social Commission for Western Asia (ESCWA) projects the Middle East will lose 42 billion dollars and roughly 1.7 million jobs due to lockdown measures, drops in oil prices, and a global decrease in economic activity. Dr. Mehrinaz el-Awady, of ESCWA, added, “Women are the majority of those who had lost their jobs. 66% of working women are in the informal sector, which is most affected by COVID-19.” New challenges in the context of COVID-19 – high rate of job loss, increased gender-based violence, and loss of social protection schemes – will exacerbate the preexisting institutional barriers women faced in the Middle East’s patriarchal society.

The Role of Civil Society

An Inter-Generational Approach: Networking and Mentorship

The panelists also highlighted the importance of seeing more women in leadership positions especially as it demonstrates what younger women can strive for and can serve as a valuable resource for educating young women on the challenges to expect, and strategies to lift existing barriers. Al-Ansari stated young women struggle with pursuing the appropriate degree, particularly during increasingly turbulent times. “Now we need to work towards that issue because we are seeing youth being lost there. I think we need to orchestrate our efforts in order to reach out to the youth and young females trying to find their way.”

Networking are key to ensuring more women in leadership roles. Changes in the economy and political landscape are bringing about improvements in women’s access to professional networks, particularly when men ally with women, as well. Dr. Nims noted, “Men historically are considered community leaders and high-level representatives of their own families and elite groups.” Yet, as the economy diversifies and women enter new sectors, “we are having more multi-gendered networks.” This emphasizes the important role men play in promoting women’s advancement to decision-making positions. Dr. el-Awady added, investment in “education outside the formal system, courses training and mentorship programs, because education and learning are the light we are going to see at the end of the tunnel.”

“National development will not be possible unless the operations are based on the principles of equitable participation of women and men in public life, and that women's needs are mainstreamed in the national development programs. Indeed the commitment demonstrated by the Kingdom of Bahrain towards the advancement of women is deeply rooted in our history, through which the progress of women is characterized by its early beginnings in education and participation in the municipal elections; in addition to early economic participation and vital sectors of the labor market, such as health, banking, finance, justice, engineering, etcetera. As a result, our country has witnessed escalating progress in women's participation and decision making positions.”

“When it comes to the public sector, and this is where I want to focus on, we feel that there is a problem in the entry, sustainment, advancement of women in the public sector. And we know that this is the maker, this is the factory of leadership. We know we have women in leadership in the private sector, we know women have proven themselves even in [the] local community that they are leaders, and [that] they are leaders of change and initiators and decision makers. They are in the security sector as well, but when they start looking for leaders to select for ministers, they do not find women because they are not sustained in the public sector. They do not reach the highest level of decision making in the public sector to actually have a pool of these women. So this is one of the problems then. We do have to ask ourselves why, why we don't have women in this highest level.”

“Networking is important and I think men [are] able to network, not because they do have strong skills in networking that women do not have, but because there are many men who are able to reach senior positions. And by default, if they're going to network they're going to network with each other. Like, if I'm a CEO and I'm a man, I'll be networking with another man because there are not many women as CEOs. So it's natural, in their positions, due to the fact that they were able to reach that. But what’s more important than networking is mentorship, which my colleagues had referred to. And this could be a very complex aspect and it could be as simple as, ‘Get your chair and come sit next to me and let me show you how we're going to do that,’ and providing on-the-job training, which is very important and key to junior people and fresh graduates. And they need that to gain confidence in themselves.” 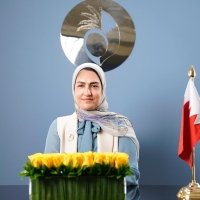 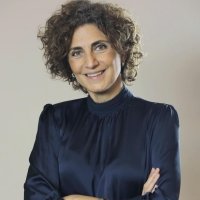 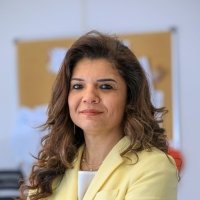