A Conversation with President Irfaan Ali of Guyana

Guyana, one of the fastest-growing economies in the world, has an abundance of energy resources that could help address severe global shortages. In 2015, it discovered off-shore oil reserves that have produced unprecedented tax and royalty revenue and powered double-digit GDP growth. In Guyana, that windfall promises dramatic improvements to infrastructure and the health and education systems in a country with fewer than 1 million inhabitants. Outside Guyana, the oil could help bring down energy prices that have fueled inflation and worsened poverty worldwide, and reduce dependence on Russia’s energy exports.

To take advantage of these opportunities, however, is an enormous governance challenge. Guyana has identified at least 11 billion barrels of oil off its coast, but its leaders recognize that the renewable energy transition will eventually sap demand for its abundant oil and gas. So it is sprinting to ramp up energy exports, while eager to avoid errors from other commodity booms throughout history, whether unfair deals with foreign investors, corruption, environmental degradation, missed development opportunities, or deepening divisions between ethnic communities.

How can Guyana best take advantage of its energy resources? What role should the U.S. government play in supporting Guyana’s broad economic development priorities and strengthening its democratic institutions? How can Guyana help address the global energy crisis? In this conversation, President Ali shares his vision for Guyana’s future and global role.

“You will see in our development strategy, whether it’s the food strategy, the oil and gas strategy, the infrastructure strategy… a full commitment to ensuring that our forest remains intact, remains sustainable. We have the lowest deforestation rate perhaps in the world, far below industry standard. We have a monitoring system that is of international standard. We have audits. So the development part of Guyana is a part that reaches towards sustainability, is a part that is diversified. And that is why these forums are critically important for us - ensuring that the world and investors, people in academia and policy makers, understand the wide-ranging multi-faceted nature of development and the path of development we are taking to position Guyana as a sustainable story in our development phase.”

“One of the most important relationships for Caricom and for Guyana is that to the United States. The United States is an important partner for us, not only from a developmental perspective but from a societal perspective. Our countries are connected culturally. There is no other connection that is greater than people-to-people connection, and you are home to the largest diaspora of Guyana, and sometimes we miss this point. We are not only connected through policy making, through foreign policy, through economic connection, through private sector connection –  we are connected through people."

“One of the greatest hindrances to the development of Guyana has been not only the cost of energy, but the reliability of energy. I grew up in a time in Guyana when you had so many power outages that when you actually had electricity, we used to jump up in the village and sing and dance because it was a rarity. We worked ourselves out of that situation. Today, we have more or less fixed access, but the costs have remained an important issue. The reliability of the access is also an important issue. And then we have a third [issue] - how renewable that access is. And all three of these areas we are addressing in the energy mix.” 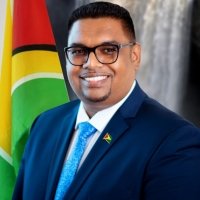