Fifth generation technology (better known as 5G) will reshape communications and trade. Yet as noted in multiple articles in the Spring 2020 issue of The Wilson Quarterly, 5G’s transformational possibilities already have made it a battleground, even before its broad deployment in advanced economies.

This Ground Truth Briefing examined some of the key conflicts, concerns, and sites of possible collaboration. Why does it matter who makes the rules for 5G?  How might its bounty be shared more widely in the global economy?

“5G isn’t really about us and about our cellphones, although it will improve their speed – and you’ll be able to take a Netflix movie that might take 20 minutes to download right now over a cell network and do it in 20 seconds or less. But what it’s really about is the internet of things, because it will allow factories, farms, and places that are distant or… cannot be connected easily over a hardline network, to be able to use the cell network just as quickly.”

“The issue isn’t really just a trade question, it’s a national security question. The national security question may not be the one you’re thinking about. We’re not really worried about the question of whether the Chinese are listening in to our conversations or downloading our data. It turns out they’re pretty good at doing that at 3G and 4G as well… The bigger question is if we ever got into a conflict with China, or we became dependent on China or any other producer for building out our network, how much do you want to have a foreign dependence here?”

“This is not just about Huawei’s technology. Blocking Huawei has long been the public face of the US’s 5G security structure strategy, but the situation is a lot more complicated than any one company or even one technology.”

“There’s obviously a limit… The internet has always been subject to government authorities and the states and territories where it operates. But you can’t have what we rely on, this mobile rapid commerce and communication, without intercountry connectivity.”

“As the trade agreement is being implemented, North American governments need to use this opportunity to develop a strategy for technology innovation. Perhaps holding an annual summit? They’re already going to be in the room, and 5G is just the beginning technology. Think how would you collaborate on AI? How we can collaborate on quantum information science and technology? We need to think about creating legal frameworks for sharing technology ideas and mechanisms for collecting and analyzing strings of data generated by nations. We need to consider shared regional technology innovation incubators where the private sector can sit side by side with policymakers to develop new solutions…”

“This is why it’s really important to understand what each of these technologies mean. When we talk about open source… the first thing I think of – from a cybersecurity perspective – is that the more people looking at this kind of software code, the more secure it is. And second, it gives us an opportunity to instead of having to use hardware we can use virtualized networks in the cloud.”

“There has been a lot of uncertainty about what exactly Trump wants to do. Roughly speaking, we can think about the Trump administration’s attitude towards China as being driven by two different things. First is a long-standing increased hawkishness towards China -- which would have manifested itself under a Clinton administration had it have happened as well… Then, there are President Trump’s particular obsessions, which mostly have to do with the balance of trade.”

“The more important dampener on more active engagement between Europe and the United States on trying to build up some kind of shared technology companies to approach technology going forward is that the Europeans are, frankly and understandably, extremely apprehensive about becoming more dependent on a United States in which either Donald Trump is the president, or in which somebody like Donald Trump could be elected as president in the future.”

See our newest content from the Science and Technology Innovation Program.

Subscribe for updates about new events, articles, videos, and more on 5G.

Strategic and National Security Advisor to the Wilson Center's CEO & President; Director of the Science and Technology Innovation Program 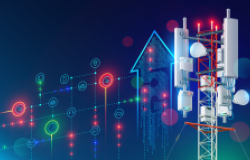