The World Health Organization has described Latin America as the new global epicenter for COVID-19, and strict lockdowns in much of the region are asphyxiating economic activity. As Latin America suffers an unprecedented slowdown, International Labor Organization forecasts suggest it will suffer the world’s worst increase in joblessness.

How have Latin America’s governments responded to this economic catastrophe, and how will those policies condition the region’s post-pandemic recovery? Will aggressive stimulus measures designed to limit bankruptcies and unemployment produce long-term debt burdens? Will countries with easy access to markets and the International Monetary Fund, such as Peru and Panama, recover faster than countries like Argentina and Ecuador that faced debt crises even before the coronavirus?

Please join us on Wednesday, June 10 from 11:00 a.m. to 12:00 p.m. for a conversation with three former finance ministers about Latin America’s economic policy responses to COVID-19 and the implications for the region’s recovery.

“The recovery is neither a ‘V’ recovery or a ‘W’ recovery or an ‘L’ recovery, it’s something that looks different from any letter in our alphabet, which is a severe decline with some recovery.”

“Latin America is not as well-prepared to deal with this situation as previous epicenters, like China, Southern Europe, the U.S., because we’re not in a position where we can do whatever it takes. We can do whatever we can. We all have limitations, mostly from the fiscal point of view, but we also have limitations that have to do with the initial health infrastructure, with the operational capacity of our governments that are slower to react and to respond, the lower coverage of our social safety nets.”

“We may be entering the stage and the era of fiscal populism because it’s going to be very easy for people to try to get votes for those elections advocating basically a debt default, we don’t have to pay all this debt …. It’s going to be difficult, but necessary, that someone comes to the political contest and says, ‘look, this is the time to be responsible. We accumulated a lot of debt and we need to pay it, because otherwise our growth is not going to look good, not just this year or next year, but during this whole decade.’ So pragmatism has to prevail, and we have to make sure that these fiscal populists that will emerge are kept at bay.”

“Perhaps a goal of the transition of the policies around the crisis is not to damage the permanent platform for growth in the future. The previous government and the previous economic program have not been successful in providing welfare in terms of boosting growth or lowering inflation during the last four years, but it has been very responsible and successful in giving a legacy, a better platform to grow ahead.”

“It’s going to be a difficult situation for Latin America particularly because of the starting point in Latin America. The countries of the region were not growing fast before this crisis started, and second and very importantly, our capacity to respond is much smaller when you compare to developed countries, particularly because of the fiscal constraints we have in all the region.”

“It’s a very challenging situation for Latin America as a whole. For Brazil, I think the recovery will depend pretty much on our ability to implement the reforms that we still need. Not only on the fiscal front, but also to improve and increase the productivity of the Brazilian economy.”

“All the measures that have been implemented in Brazil so far with fiscal impact are temporary. The government was allowed to spend more, but only related to the actions necessary to mitigate the impacts of COVID-19. This is very important because we cannot afford to have permanent fiscal expansion, considering our starting point. We have to do what we have to do now, as long as it is temporary, and so far it has been temporary.”

“I’m not sure, to be honest with you, if we will be able to avoid an increase in taxation in the future to pay for this fiscal expansion, but if we keep the expansion temporary, we have a chance to avoid increasing taxation if we are able to continue with the reforms…. We do have to reduce the size of the public sector in Brazil and the size of public expansion in Brazil; it’s too high. We have a risk, and the risk is that it can affect growth going forward if we have to finance this fiscal expansion with higher taxation. But the message so far is that all the expansion is temporary, and this is good news for Brazil.” 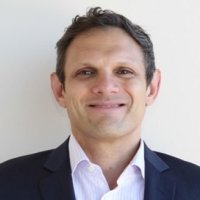