Skip to main content
Support
Show
Streaming
Herder-Farmer Conflicts and Food Security in Southeast Nigeria: Plugging the Gaps in the Peacebuilding Policy Framework
Explore More
Close
Event
Security and Defense
The Honduran National Police: Is progress being made in cleaning up and reforming the force?
On Thursday, June 16, 2016 at 3:00 – 5:00 ET
Share on FacebookShare on TwitterShare via Email
Share
Watch Now
Part of the Democratic Governance & Rule of Law in Latin America
Event

After numerous high-profile cases of police abuse and corruption, Honduran President Juan Orlando Hernández turned to a group of civil society representatives and notables to form a police reform and purge commission.  Since its inception in 2016, the Commission has taken action against nearly 2,500 police beginning at the highest ranks first.  With their mandate renewed, the Commission will continue the purge process and refocus its efforts on the urgent need for reform.  On February 22, members of the Commission discussed their progress in reform efforts, and an independent policing expert provided commentary. 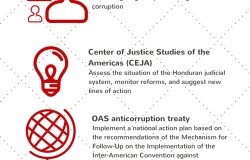