Event Summary: How Brazil’s Economic and Political Realities Will Shape the Plans of the Bolsonaro Administration 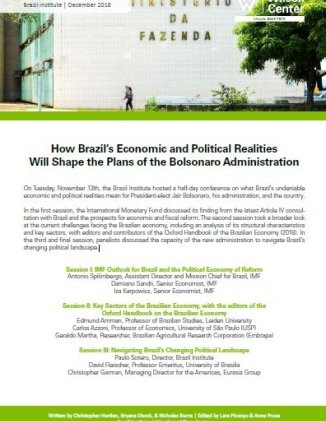 By Brazil Institute
Economics and GlobalizationBrazil

On November 13th, the Brazil Institute hosted a half-day conference on what Brazil’s undeniable economic and political realities mean for President-elect Jair Bolsonaro, his administration, and the country.

In the first session, the International Monetary Fund discussed its finding from the latest Article IV consultation with Brazil and the prospects for economic and fiscal reform. The second session took a broader look at the current challenges facing the Brazilian economy, including an analysis of its structural characteristics and key sectors, with editors and contributors of the Oxford Handbook of the Brazilian Economy (2018). In the third and final session, panelists discussed the capacity of the new administration to navigate Brazil’s changing political landscape. 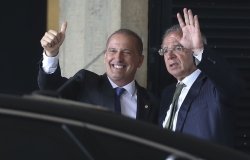 Article
Governance
Get to Know the Ministers of the Bolsonaro Administration
By Brazil Institute on December 14, 2018