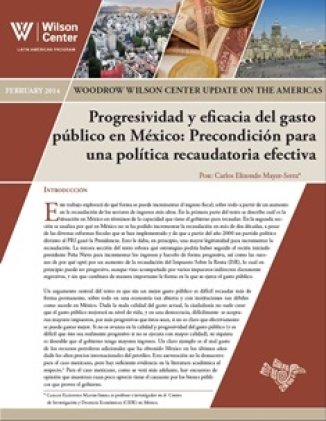 Relative to the size of the Mexican economy, the government of Mexico takes in less tax revenue than any other member of the Organization for Economic Cooperation and Development (OECD). When compared to the rest of Latin America, where the fiscal burden has grown considerably over the last decade, Mexico’s fiscal burden has barely increased. Mexico’s income tax collection remains close to the regional average of 5 percent of GDP. Moreover, recent Mexican governments failed to enact major revenue-enhancing tax reforms, even in the face of declining oil production and an increasingly obvious need for public investment.  The latest reform promoted by President Enrique Peña Nieto and approved by the Mexican Congress in November 2013 does not deviate from this pattern:  the expected additional revenue from the reform is only 1.4 percent of GDP.

What are the reasons behind Mexico’s low tax revenue? And why, given the expectation that democracies ought to be able to trade consent and accountability for revenue, have three democratically-elected governments failed to break the mold?

Democracy did not change the nature of tax collection because people’s perceptions on the quality of government spending did not change. Without efficient public spending, it is difficult to collect more in a permanent way, especially in a country such as Mexico, with a liberalized economy and weak institutions. Due to the ineffectiveness of current expenditures, citizens have little faith that public spending can improve their quality of life. Recent surveys testify to the expectation among an overwhelming majority of citizens that additional revenues will not be spent either effectively or progressively.  In one survey this distrust was greatest among the poorest respondents. Until tax reform proposals are preceded by real and visible improvements on the spending side, the necessary support to increase tax revenues by substantial margins will not exist.

Beyond this basic distrust, Mexico’s revenue system historically has had other weaknesses:  a long list of costly tax exemptions; evidence of clientelism; the fact that income from the oil sector reduced the need for other tax revenue at moments that might have been opportune for tax reform; the long border with the United States, which means lost revenue from consumers avoiding higher consumption taxes in Mexico as well as an easy flight of capital (and wealthy people) avoiding levies on income or property; the fact that Mexican states and municipalities tax very little, even when permitted to do so by the Constitution, at the same time that they have taken a rising share of national tax receipts via transfers from the national government.

The November 2013 reform did little to increase tax revenue overall and did nothing to increase the transparency or effectiveness of spending.  It was publicly described as progressive, with few changes to the VAT and increases in rates on corporations and the highest personal incomes, an end to the practice of fiscal consolidation by conglomerates and holding companies, along with new ten percent levies on distributed dividends and profits from the sale of shares.  But in their search for revenue, the reformers also introduced taxes that are likely to have regressive or problematic effects, such as those on sugary drinks and junk food, as well as a tax on mining operations that will devolve half of its new revenue to the host municipality, whether or not it has a way to use the money.

Along with more accountability and transparency on spending, the Mexican federal government should end many exemptions from the VAT while states and municipalities increase their tax effort.  One obvious possibility lies in property taxation, in which Mexico lags distantly behind other OECD countries.