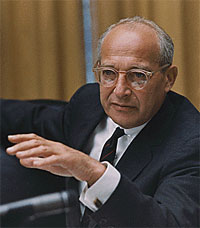 Walt Rostow (October 7, 1916-February 13, 2003) was a prominent economic historian who advised both the Kennedy and Johnson administrations. Appointed first by Kennedy to the position of deputy national security advisor, then by Johnson as national security advisor, Rostow helped formulate U.S.’s posture towards Israel, particularly on issues involving nuclear policy.

Walt Rostow (October 7, 1916-February 13, 2003) was a prominent economic historian and an influential advisor to both President Kennedy and President Johnson.

Rostow attended Yale University as an undergraduate and went on to become a Rhodes Scholar at Balliol College, Oxford. After returning to Yale to earn his PhD, he began his career teaching economics at Columbia in 1940. From 1942 to 1945, Rostow served in the Office of Strategic Studies. He subsequently taught American history at Oxford and Cambridge and economic history at MIT, where he wrote his most important book, The Stages of Economic Growth.

In 1961, Rostow became deputy national security advisor to President Kennedy, though he left to work as chairman of the State Department’s Policy Planning Council by the end of the year. He held that position until 1966, when President Johnson appointed him national security advisor. Rostow expressed staunch anti-communist views and  supported continued military intervention in Vietnam, even as other officials and the general public became increasingly pessimistic about the prospects for U.S. victory.

While working as national security advisor, Rostow became involved in setting the United States’ posture towards Israel. Although he supported military and economic assistance to Israel, Rostow believed that increased public alignment between the two states could run counter to United States’ diplomatic and oil interests in the region. After reviewing the May 1967 report from the  Atomic Energy Commission team that had inspected Dimona along with other intelligence, Rostow informed President Johnson that though the team found no evidence of a nuclear weapons program, “there are enough unanswered questions to make us want to avoid getting locked in too closely with Israel.”[1]

Concerns about Israel’s nuclear program were tabled by the United States during the build-up to the Six Day War and its aftermath. Though Rostow, Johnson, and Secretary of State Dean Rusk tried to convince Israel not to resort to military force, they supported Israel once the war began. When the nuclear issue resurfaced in January 1968, just prior to Prime Minister Eshkol’s visit to the United States, Rostow recommended that the president make it clear that the United States expected Israel to sign the NPT.[2]

In 1969, Rostow left Washington to work as a professor of economics and history at the University of Texas at Austin. Rostow remained at the University of Texas until his death in 2003.  Various governments awarded him the Order of the British Empire and the U. S. Legion of Merit for his military service, and also received the Presidential Medal of Freedom in 1969. Throughout his career, he wrote thirty-four books on economics and foreign policy.