ON THE MAP: This map illustrates the airstrikes in August by location and concentration. 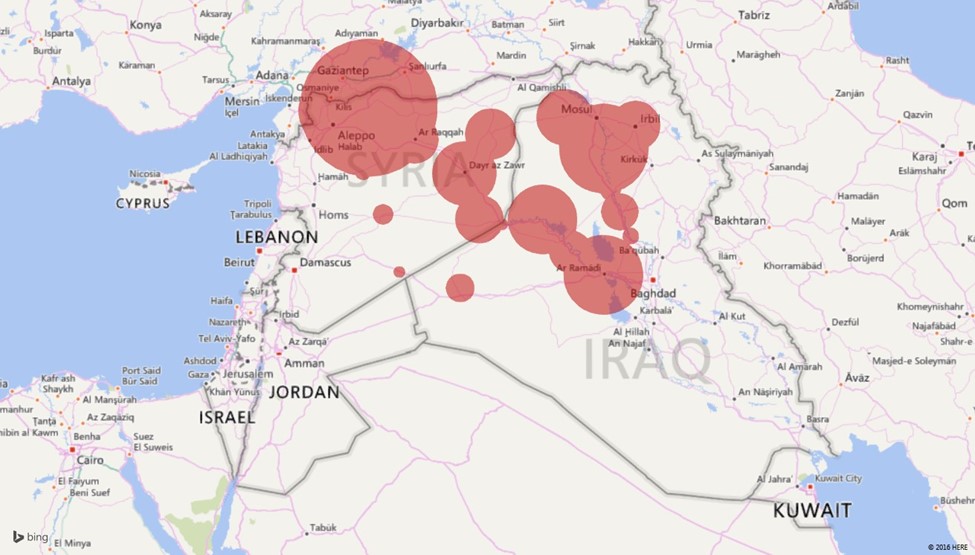 In August, the U.S.-led coalition against the Islamic State – also known as ISIS, ISIL, or Daesh – conducted 24 percent fewer airstrikes in Iraq and Syria compared to July. The airstrikes totaled 273 in Syria and 251 in Iraq.

In Iraq, the U.S.-led coalition conducted 58 airstrikes in Mosul, one of ISIS’s strongholds, and 46 airstrikes in Qayyarah, a key city near Mosul. Kurdish forces and the Iraqi army continued to push towards Mosul and prepare for an offensive to seize it from ISIS. Brett McGurk, the U.S. Special Envoy for the Coalition to Counter ISIS, said on August 11 that preparations for the offensive were “approaching the final phase.”

In Syria, 137 of the airstrikes targeted Manbij, accounting for half of the airstrikes in August. The city is significant because it facilitates ISIS’s flow of foreign fighters and other resources across the border from Turkey. By mid-August, U.S.-backed fighters had liberated the city. The success in Manbij will “help reinforce the growing isolation of Raqqa and enable us to achieve the next objective of our campaign in Syria – collapsing ISIL’s control over that city,” Secretary of Defense Ashton Carter said on August 15.

The following graphics illustrate key data points and trends in the air campaign as of August 2016.

TRENDS IN AUGUST: The U.S.-led coalition conducted 24 percent fewer airstrikes in both Iraq and Syria in August.

TRENDS IN IRAQ: In Iraq, 23 percent of the airstrikes in June targeted Mosul, and around 18 percent targeted Qayyarah. Ramadi – which Iraqi forces liberated from ISIS in December 2015 – was the third most frequent target, accounting for around 14 percent of U.S. and coalition airstrikes in Iraq.

COST: By the end of July, U.S. spending on Operation Inherent Resolve had topped $8.7 billion, averaging around $12.1 million per day.

U.S./COALITION AIRSTRIKES: Between August 2014 and September 2016, the United States conducted 77 percent of the airstrikes in Iraq and Syria. Coalition partners conducted the remaining 23 percent.