Rising against so called Honor Killings in Jordan 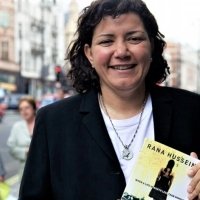 Based on my experience in reporting and advocating against the brutal murder of women, the so-called honor killings in Jordan, the latest street protests are an important indicator of how society’s attitudes towards gender-based violence have shifted.

In mid-July, 2020, the voice of a traumatized woman was recorded on a videoclip and widely shared by Jordanians on social media.  Shortly after the video went viral, horrific details emerged by a person claiming to be the neighbour.

A young lady, Ahlam (meaning dreams) was reportedly murdered by her father in one of the country’s governorates to “defend his family’s honor.” He crushed her skull with a brick in front of everyone in the street “then sipped tea and smoked a cigarette waiting for the police to come and arrest him”, the neighbour claimed.

Another woman, Fatmeh, had her eyes gouged by her husband in November 2019 in a domestic dispute.

Both incidents caused an uproar in Jordan, mostly expressing their anger on social media.  The majority denounced violence and the ‘barbaric nature’ of both incidents and called for swift justice for the two women. In response, the Jordanian government issued a gag order on both cases banning the media from reporting on it and the public from discussing these crimes on social media.

However, the government’s ban did not prevent groups of women and young activists from organizing several protests to demand better legislation and procedures to protect women in Jordan.  Petitions also went viral championing women’s causes in the country.

Based on my experience in reporting and advocating against the brutal murder of women, the so-called honor killings in Jordan, the latest street protests are an important indicator of how society’s attitudes towards gender-based violence have shifted. When I started to report cases of these killings that targeted mostly women, I would have many who were not happy with my reporting. Some men would challenge me about the problem in public lectures I gave.

The legal system also used to wink at killers by offering them almost a slap on the hand for murdering a female relative in the name of family honor. The media also used to shy away from reporting about such a “sensitive issue” as it deemed it a family matter and thus related to the ‘honor’ of the family.  The government also ignored the idea altogether and pretended it did not exist.

But things changed in Jordan in the mid-2000s thanks to the persistence of the civil society, officials, activists, the women’s movement, top decision-makers, and members of the Royal family. We were able to push the government to first admit there is a problem.  Once this was achieved, the government then became responsible for the safety and security of these women.

The government adopted several measures to address the issue. Laws were amended to pass stiffer punishments against the killers. In the 1990s, perpetrators of such murders would get three months to one year for killing a female relative to defend their ‘honor.’ Today, the minimum sentence is seven years, and the maximum is life in prison. The courts and the justice system are no longer tolerating the ‘family honor’ excuse.

More recently, the government opened a shelter to house women whose lives are in danger. The new home offered them an alternative and a new beginning other than being imprisoned for indefinite periods and without a charge by the state to protect them from being harmed or killed.

Another important change was the public’s perception of the issue. The majority of Jordanians are more vocal about their rejection of all forms of gender-based violence and want to see concrete and serious steps being adopted by the government. Also, today’s youth are leading the way by their clever and practical use of social media, which was unimaginable in the 1990s.

Sadly, Ahlam and Fatmeh could not be saved from the atrocities practiced against them by their family members. However, the new movements and loud voices that are heard in the streets of Jordan and on social media could contribute to raising awareness and hopefully saving more lives.

Journalist; Author, Murder in the Name of Honour
Read More