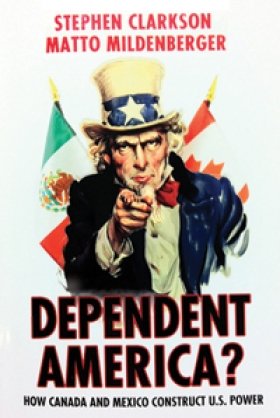 Following the acclaimed Uncle Sam and Us (2002) and the influential Does North America Exist? (2008), Stephen Clarkson—the preeminent analyst of North America’s political economy—and Matto Mildenberger turn continental scholarship on its head by showing how Canada and Mexico contribute to the United States’ wealth, security, and global power.

This provocative work documents how Canada and Mexico offer the United States open markets for its investments and exports, massive flows of skilled and unskilled labour, and vast resource inputs—all of which boost its size and competitiveness—more than does any other U.S. partner. They are also Uncle Sam’s most important allies in supporting its anti-terrorist and anti-narcotics security. Clarkson and Mildenberger explain the paradox of these two countries’ simultaneous importance and powerlessness by showing how the U.S. government has systematically neutralized their potential influence.

Detailing the dynamics of North America’s power relations, Dependent America? is a fitting conclusion to Clarkson’s celebrated trilogy on the contradictory qualities of its regionalism—asymmetrical economic integration, thickened borders, and emasculated governance.

“In a quest to solve its deep-seated problems, the United States has sought solutions everywhere except its North American home. In Dependent America?...Clarkson and Mildenberger make a cogent case for why U.S. revitalization will depend on building a deeper, more collaborative relationship with Mexico and Canada.”—Robert A. Pastor, professor, American University and author of The North American Idea

“Stephen Clarkson is an exceptional documentalist of the North American relationship between the NAFTA partners. This final volume of his trilogy, co-produced with Matto Mildenberger, amasses a great deal of information on the critical axes of North American power. Dependent America? could well become a very important text for the Canadian public to re-examine, through a new lens, the American exercise of power in North America.”—Daniel Drache, professor of political science and senior research fellow, Robarts Centre for Canadian Studies, York University

“A must-read for the layman as well as the serious scholar, Dependent America? is an indispensable tool for understanding North America’s geopolitical relations and realities, which constantly escape the grasp of structured and detailed analysis. At this doubtlessly crucial moment in the making and breaking of the continent, Dependent America? should find its way into the hands of North American politicians who are tired of extra-continental adventures, and ready to champion the quest of visionary nation-building.”—Lorenzo Vignal, Ambassador of Mexico (Ret.)

“Dependent America? is an engaging bookend to a remarkable trilogy on the elusive North American community. Clarkson and Mildenberger provide a refreshing challenge to the conventional wisdom of the U.S. as a self-determined power, and encourage especially Canadians to reflect more profoundly on their role in both constructing and limiting North America’s interdependencies. The book also will certainly be welcomed as a unique contribution to broader debates on the hegemonic decline of the U.S.”—Jeffrey Ayres, Department of Political Science, Saint Michael’s College

Former Public Policy Scholar;
Professor of Political Economy at the University of Toronto