Uncle Sam and Us: Globalization, Neoconservatism, and the Canadian State 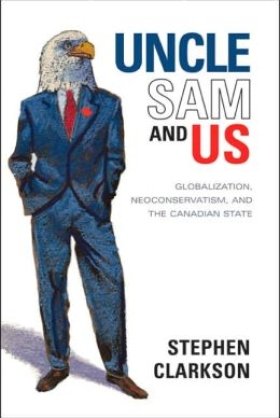 Between them, Brian Mulroney and Jean Chrétien radically altered the structure and functions of the federal government, first by signing and implementing major trade liberalization projects, and then by cutting back the size of their governments’ budgets and the scope of their policies. Uncle Sam and Us analyzes the Mulroney-Chrétien era’s impact on Canadian governance through two related factors, globalization from without and neoconservatism from within.

Stephen Clarkson begins his study by conceptualizing the present Canadian state as a five-tiered, nested system stretching from the municipal and provincial levels, through the federal government, and on to the new continental and global spheres of governance: in effect, he argues, the North American Free Trade Agreement and the World Trade Organization have added a “supraconstitution” to Canada’s existing institutions. His analysis concerns the changes that have occurred not just in the federal government, but in provincial and municipal governance as well. The impact of globalization and neoconservatism is examined extensively in the second part of Clarkson’s study, which examines how the functions of the Canadian state have altered. Clarkson addresses the changes in a number of policy areas such as macro and monetary policy, regulatory, industrial, and trade policy, as well as social, labor, environmental, cultural, and foreign policy.

In linking external forces and internal factors in his analysis, Clarkson brings together separate aspects of the Canadian state into a comprehensive understanding of the current Canadian political climate. He combines a global knowledge of the international political economy with a micro concern for detailed analyses of policy issues, and concludes that the responsibility for Canada’s predicament lies less with external forces, than with Canadians and the governments they elected. He ends with a hopeful look into the future, pointing towards a realization of the shortcomings of neoconservative globalization, and the expectation of a new governing paradigm.

This book is the first of Clarkson’s three-volume series, followed by Does North America Exist? Governing the Continent after NAFTA and 9/11 (2008) and Dependent America? How Canada and Mexico Construct U.S. Power (2012).

1. Not Whether, but Which Canada Will Survive
2. The Peripheral State: Globalization and Continentalism

I. The Polity: Reconstituting the Canadian State
Change from Without
3. Continental and Global Governance
4. NAFTA and the WTO as Supraconstitution
Change from Within
5. The Federal State: Internal Trade and the Charter
6. The Municipal State: Megacity and the Greater Toronto Area

II. The Economy: Reframing the State's Functions
The Macro Economy and the Managerial State
7. The Taxing State: From Lord Keynes to Paul Martin
8. The Banking State and Global Financial Governance
The Oligopolistic Economy and the Regulatory State
9. Financial Services: National Champions at Risk
10. Telecoms: From Regional Monopolies to Global Oligopolies The External Economy and the Internationalizing State
11. The Trading State
12. The Investing State
The Microeconomy and the Interventionist State
13. The Residual State: Accommodation at the Federal Level
14. The Industrial State Goes Provincial

III. The Society: The Contradictions of Neoconservatism
15. The Civil State: Social Policies under Strain
16. The Working State: Labor Relations under Stress
17. The (Un)sustainable State: Deregulating the Environment
18. The Cultured State: Broadcasting and Magazines
19. The Diplomatic State: Lockstep under Hegemonic Dominance
20. The Post-Globalist State and the Democratic Deficit

“In this insightful and compelling book, Stephen Clarkson meticulously shows how the appealing experiment called Canada has been endangered in the past two decades. But he also makes a convincing case that a rescue effort is not too late.”—Linda McQuaig, Toronto Star columnist and author of All You Can Eat: Greed, Lust and the New Capitalism

“Only a scholar with Stephen Clarkson’s vast knowledge and deeply analytical approach to Canada could pull off a book like this. It works so well because of his comprehensive understanding of Canada’s historical and current political economy, his analytical perspective, and his ability to present a huge amount of information and material in an extraordinarily interesting way.... The book goes from strength to strength and culminates in a truly masterful chapter on Canada’s foreign relations....This easily stands to be the best current book on Canadian political economy.”—Marjorie Griffin Cohen, Department of Political Sciences, Simon Fraser University

“Stephen Clarkson has done a masterful job of reminding us why politics and the state matter so much to the future of Canada.”—Sylvia Bashevkin, director of the Canadian Studies Program, University College, University of Toronto, and author of Welfare Hot Buttons: Women, Work, and Social Policy Reform.