Building Back Diplomacy: The Biden Administration Strides into Asia

After less than two months in office, the Biden administration has embarked on a flurry of diplomacy toward the Indo-Pacific. Following the publication of its Interim National Security Strategic Guidance, the President convened a virtual summit of leaders from the Quad: Japan, India, Australia, and the United States on March 12. Secretaries of State and Defense took their first international trips to will meet in person with counterparts in Tokyo and Seoul. Afterward, Secretary of Defense Austin flew to India while Secretary of State Blinken joined National Security Advisor Jake Sullivan in Alaska to meet with their Chinese counterparts.

Experts from the Wilson Center’s Asia Program and Kissinger Institute on China and the United States reviewed these meetings and analyzed what’s to come in the Indo-Pacific in 2021 and beyond.

"What is the impetus now for U.S.-China relations? The administration has spoken about “strategic patience.” It’s in no rush. It wants to conduct its reviews and get China policy right. But patience shouldn’t mean just waiting around for something to happen.”

"Japan was greatly reassured by the hawkish stance that the United States has towards China, that was really voiced clearly under the Trump administration be continued under the Biden administration as well, and that’s particularly important for Japan as Chinese encroachment in the East China Sea escalates on the one hand and its challenges with China’s economic competition increases on the other."

"Given that Japan doesn’t see eye to eye with the United States when dealing with the economic challenge posed by China, there’s still confusion—really—about how to further that economic cooperation and certainly COVID has exposed vulnerabilities of supply chains worldwide and the risk of overdependence on China."

"Like the rest of the world, as Japan tries to deal with the disruptions and economic setbacks posed by COVID, there’s also a recognition that there needs to be fundamental change to deal with the broader issues of technology disruption and the automation challenges that will be facing the global economy going forward and also the rise of economic nationalism across the board."

"The China issue now occupies a central and urgent position in New Delhi’s thinking, and especially since a deadly border clash with Chinese troops last summer which really woke India up to the threat of China on its border. India has long viewed Beijing as its greatest long-term strategic challenge and that clash strengthened that perception even more."

"The issue of democracy will not go away given that U.S. governments—including the Biden administration—have stated that shared values, including democracy, helped drive the bilateral relationship, and this is meant to draw a contrast with China. Similarly, the core messaging around the quad emphasizes this idea of four democracies working together to promote a free and open Indo-Pacific, in contrast, you [have] an undemocratic China and its undemocratic vision for the region."

"There was a kerfuffle over the language used around ‘denuclearization.’ This is an ongoing issue of semantics and policy. Slight difference in how the South Koreans have phrased it versus the Americans so that’s certainly something that needs to be clarified in the weeks, months and years ahead."

"This trip comes at a time when North Korea has withdrawn into self-isolation, both diplomatically and economically. Not only does this put the people of North Korea at risk of dealing with hardship, but this comes as the North Korean leadership has vowed to build an even more powerful nuclear warhead."

"I hope that Pyongyang recognizes that in the long run, if they’re looking for a kind of step-by-step strategy on the nuclear negotiations, that it wouldn’t be harmful to have a regional understanding. I think that if they see some [regional] cooperation developing, that we might see China and North Korea pushing for more of a multilateral discussion hosted by China."

“As we’re looking at incidents like the Atlanta spa attacks, we’re starting to see not only the attacks themselves but how they’re interpreted maybe by local officials. There was a spokesperson for the county police that said ‘oh, you know maybe he was just having a bad day and was just taking it out’ and later on, as it turned out, he apparently owned and photographed himself wearing a ‘COVID came from China’ t-shirt.”

“The question at the end of the day is who are these foot soldiers to the cause of xenophobia. It is often carried out by people who don’t necessarily follow the talks in Alaska that just occurred between the U.S. State Department and the Chinese foreign ministry. But, when foreign policy work gets really comfortable with the idea of grouping culture, individuals and communities together, then things start to get messy.”

“As a field, foreign policy really owes it to the Chinese diaspora and the Chinese national community to really conduct work with respect and discretion.” 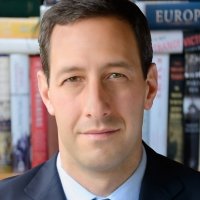 Global Fellow;
Senior Fellow at the United States Studies Centre at the University of Sydney