75 Years On: How Lessons from the Pacific Theater Impact American Foreign Policy Today 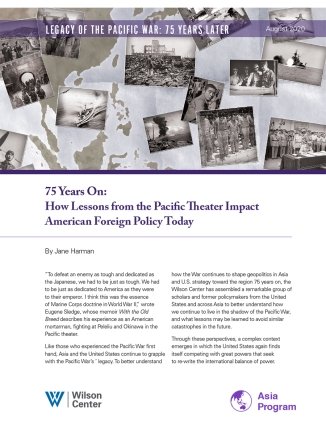 "'To defeat an enemy as tough and dedicated as the Japanese, we had to be just as tough. We had to be just as dedicated to America as they were to their emperor. I think this was the essence of Marine Corps doctrine in World War II,' wrote Eugene Sledge, whose memoir With the Old Breed describes his experience as an American mortarman, fighting at Peleliu and Okinawa in the Pacific theater.

Like those who experienced the Pacific War first hand, Asia and the United States continue to grapple with the Pacific War’s ’ legacy. To better understand how the War continues to shape geopolitics in Asia and U.S. strategy toward the region 75 years on, the Wilson Center has assembled a remarkable group of scholars and former policymakers from the United States and across Asia to better understand how we continue to live in the shadow of the Pacific War, and what lessons may be learned to avoid similar catastrophes in the future."