The Promise and Perils of Historical Analogy: What the Pacific War Can, and Cannot, Tell Us About Asia Today 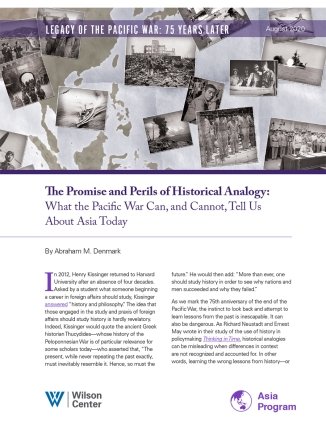 "As we mark the 75th anniversary of the end of the Pacific War, the instinct to look back and attempt to learn lessons from the past is inescapable. It can also be dangerous. As Richard Neustadt and Ernest May wrote in their study of the use of history in policymaking Thinking in Time, historical analogies can be misleading when differences in context are not recognized and accounted for. In other words, learning the wrong lessons from history—or applying the right lessons improperly—can have disastrous consequences for policymakers and the nation they serve."

In this report, Abraham Denmark explores the Pacific War’s legacy and its usage as an historical analogy. Mr. Denmark argues that, as we mark the 75th anniversary of the end of the Pacific War, it is inevitable that we try to learn lessons to prevent the repeat of such a catastrophe. The fact that this anniversary comes at a time when China is increasingly powerful and assertive, and the sustainability and reliability of American power is being questioned, brings added salience and attention to these issues. However, Mr. Denmark warns that we must be careful in determining which lessons may—or may not—apply to today.

Vice President of Programs and Director of Studies; Senior Advisor to the Asia Program; Senior Fellow in the Kissinger Institute on China and the United States
Read More