Trauma and Triumph: U.S.-China Relations and Memories of the War in the Pacific 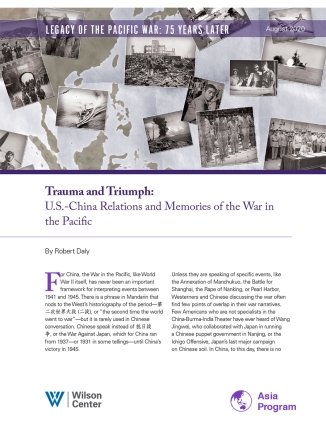 "For China, the War in the Pacific, like World War II itself, has never been an important framework for interpreting events between 1941 and 1945. There is a phrase in Mandarin that nods to the West’s historiography of the period—第二次世界大战 (二战), or “the second time the world went to war”—but it is rarely used in Chinese conversation. Chinese speak instead of 抗日战争, or the War Against Japan, which for China ran from 1937—or 1931 in some tellings—until China’s victory in 1945."

In this report, Robert Daly adopts China’s perspective towards the Pacific War and highlights important divergences in interpretation with the Western view of the conflict, a difference in memory that partially explains some of the increasing tension within the U.S.-China competition. As Dr. Daly argues, divergent Pacific War memories between the Chinese Communist Party and the United States explain in broad terms why the two superpowers are contemplating a new cold war: their mutual distrust is rooted in mythologies established when they fought as allies.

Trauma and Triumph: U.S.-Ch... by The Wilson Center on Scribd