The Pacific War's Lessons for the Continued Strategic Importance of Oceania 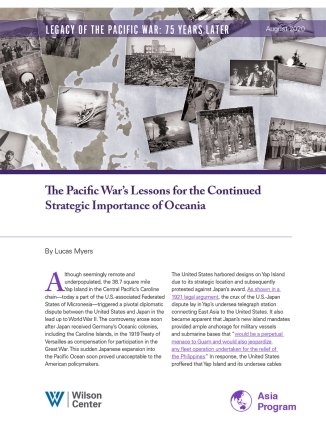 The South Pacific islands provided vital basing and anchorage for Japanese air and naval forces. If Japan had achieved uncontested control over the South Pacific islands, Imperial Japanese Navy and Imperial Japanese Army air forces could have intercepted and strangled the sea lines of communication between the United States and Australia, as well as enjoy the advantage of land-based air units and local logistics depots against any outside naval expeditionary force.

In this report, Lucas Myers explores the legacy of the Pacific War in Oceania, the struggle against Japan over the Pacific islands’ strategic geography, and the important lessons of this wartime experience that remain relevant to the competition with China today. As Myers argues, Imperial Japan caught the United States and Australia by surprise in 1941, and Xi Jinping’s China threatens to outmaneuver them again in the struggle for predominance in the Indo-Pacific. Although the advent of long-range ballistic missiles greatly extends the geographic extent of the Pacific battlespace compared to World War II, Oceania’s strategic geography will once again play an increasingly important geopolitical role as China looks to expand its influence in the region.