In a stunning reversal, a 65 percent majority of Mexicans hold an unfavorable view of the United States, compared to 66 percent holding a favorable view in 2015, according to new public opinion research from the Chicago Council on Global Affairs, Buendia & Laredo, and the Wilson Center's Mexico Institute.

The report, "For First Time, Majority of Mexicans Hold Unfavorable View of United States," surveyed residents of Mexico and the United States on these issues.

Key highlights from the survey include:
• Two in three Mexicans (65 percent) express an unfavorable view of the United States, while just three in ten (30 percent) have a favorable view, a stunning reversal from 2015 when two in three (66 percent) had a favorable view and three in ten (29 percent) had unfavorable views.
• Among the Mexicans that know or have heard of President Trump (85 percent), the vast majority (89 percent) have a negative opinion of him.
• While NAFTA negotiations are still ongoing, majorities of both Mexicans (62 percent) and Americans (53 percent) continue to see NAFTA as good for their nations’ economies.
• Mexicans and Americans alike are also broadly favorable towards international trade, with majorities saying it benefits their nations’ economies (72 percent each), benefits consumers like them (69 percent Mexicans, 78 percent Americans), and is good for job creation (77 percent Mexicans, 57 percent Americans)
• However, three in four Mexicans (75 percent) say the United States is an unfair trade partner, while two in ten (20 percent) think U.S. trade is fair. Americans, for their part, are divided on whether Mexico is a fair (47 percent) or unfair (46 percent) training partner.

"For First Time, Majority of Mexicans Hold Unfavorable View of United States" was written by the Chicago Council on Global Affairs and Buendia & Laredo and conducted with support from the Wilson Center's Mexico Institute. 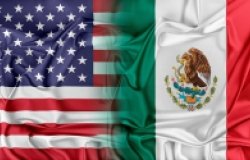