The Legacy of the Philippine Struggle for Independence in 1945 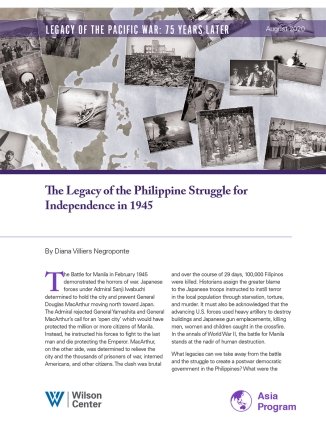 The Battle for Manila in February 1945 demonstrated the horrors of war...The clash was brutal and over the course of 29 days, 100,000 Filipinos were killed. Historians assign the greater blame to the Japanese troops instructed to instill terror in the local population through starvation, torture, and murder. It must also be acknowledged that the advancing U.S. forces used heavy artillery to destroy buildings and Japanese gun emplacements, killing men, women and children caught in the crossfire. In the annals of World War II, the battle for Manila stands at the nadir of human destruction.

In this report, Diana Villiers Negroponte analyzes the final months of the war during the liberation of the Philippines from Japanese occupation and the subsequent independence of the Philippines from the United States, a series of events whose impacts echo into the contemporary era. As Negroponte argues, the foundations of the U.S.-Philippine relationship were established in the immediate post-war era. Today, although the relationship remains in place, the rise of China provides new challenges and opportunities for the Philippines.