Final Report | Charting a New Course: Policy Options for the Next Stage in U.S.-Mexico Relations 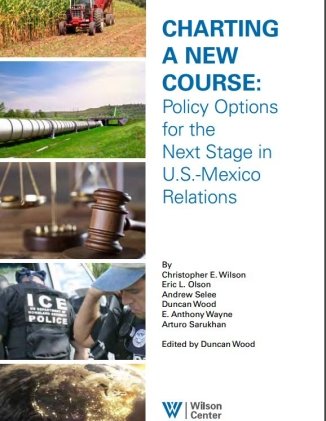 The relationship between Mexico and the United States, although undoubtedly facing its most severe test in decades, remains strong. However, the challenge to the status quo of the relationship in early 2017 does highlight the need to think about this relationship in a radically different way. In addition to reaffirming the truths of economic interdependence and mutual security support, it is clear that the time has come to focus on new issues in the relationship, to adopt a new tone, and to propose a new course. In each of the five issue areas addressed by this publication (economic competitiveness, security, migration, energy, and foreign policy), there are intriguing new directions that bilateral affairs can and should follow.

The authors of each of these chapters identify existing trends and initiatives, and look to the need to move the agenda forward to take into account the priorities of the Trump administration as well as the changing reality of the global economy and global system. Some of these ideas are new; others have been discussed before but have not had the opportunity to be adopted due to underlying political and economic realities or the priorities of previous U.S. and Mexican administrations. What is critical is the need to recognize the enormous benefits that accrue to both nations from the relationship, and the need to adequately compensate those groups in both societies that lose out from it.